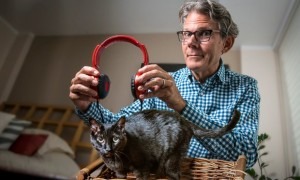 David Teie and friend. Teie said: ‘As a matter of fact I’m allergic to cats.’
Photograph: The Washington Post/Getty Images

They are a particularly tough audience – picky, moody, often impossible to please – but cats represent an untapped music market, according to one of the world’s biggest record labels.

Universal Music has announced it will be the first major label to release an album that is not for human consumption – although, until cats get bank accounts, humans will have to pay for it. Full story.