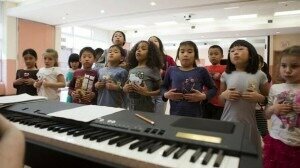 Children practice a dinosaur themed play at the Canadian Opera Company’s After School Opera Program at the Pleasantview Community Centre in Toronto.
Credit: Matthew Sherwood for The Globe and Mail

Diana Satmarean had never been to an opera before, which isn’t all that surprising since she’s just 7.

But thanks to a 10-week class offered by the Canadian Opera Company, which earned her a free ticket to the dress rehearsal of Massenet’s Don Quichotte earlier this month, she’s hooked on an art form that’s supposed to be far beyond the reach of small children.

“It was so much fun,” says the young aficionado during a break in the COC’s after-school program at North York’s Pleasantview Community Centre. “I couldn’t get over how it was staged – why is there so much singing, why are they dancing so much, why are there real horses on stage, why is it in French, why did it take the person with the beard two scenes just to die?”

Drawn-out death is as much a part of opera as young love and loud voices, but Diana and her two dozen classmates are taking it all in stride as they prepare their own after-school production of Dino Dance – a paleontology-themed show by Dean Burry, a prolific Canadian composer of lively children’s operas. Dino Dance may not feature real horses but it doesn’t lack for small-scale T-Rexes singing a pre-extinction melody titled When We Are Together Again.

It’s a long way from the COC’s main stage at the Four Seasons Centre to a rec-centre activities room near Victoria Park and Finch, and that’s the idea. “This is about taking an artistic experience directly to people’s doorstep, particularly in communities we don’t normally work in,” says Katherine Semcesen, the COC’s associate director of education and outreach. “It won’t necessarily translate into ticket sales but it makes opera more accessible while raising awareness in the wider community that our company exists.”

To make opera accessible to young children who will be performing for family and friends within a few weeks, the leaders of the Pleasantview program first need to explain the art at its most essential. “Show me the way we stand when we’re singing,” says the show’s director, Markus Howard.

“Shoulders up by your ears, then let your shoulders drop, hands by your sides,” continues Mr. Howard. “And what else do we need to remember?”

“Use your diaphragm,” responds Grace Sui, 8.

Breath management is disproportionately important in the opera world of unamplified voices that have to sustain a note while effortlessly reaching the back row of the theatre. After a few weeks’ study under Mr. Howard, the two dozen participants in the program are as diaphragm-aware as any diva. He asks them to hold a finger in front of their mouth and make it flicker as if it were a candle by holding a note as long as they can. A breathless winner is crowned, and then it’s tongue-twister time.

“Maybe my Mommy may go to Miami but maybe my Mommy may not,” intones program assistant Breanne Ritchie, with a precise articulation rarely heard in the outside world. The class, most of them anyway, try to sing the phrase faster and faster until the room reaches a happy state of elocutionary collapse. It’s a talent that will come in handy when the performers have to pronounce words like Cretaceous and Parasaurolophus – the class has also had the benefit of coaching from a ROM dinosaur expert who dropped by for an in-class tutorial.

Even though he’s working with children as young as 7, Mr. Howard doesn’t shy away from opera’s technical side. The students (whom he addresses with the attention-getting honorific “Ladies and Gentleman”) throw around terms such as libretto and fortissimo, discuss the emotional emphases in their lines and add signature moves to their choreography as, transformed into paleontologists, they simultaneously look for dinosaur bones and sing “Searching for the past, searching in the muck, searching for the answers but not having any luck.”

At one point he asks for a solo volunteer to demonstrate the soft pianissimo dynamic. Rachel Leplae, just 7 and a budding rap star, bravely takes on the challenge.

“Can we do an assessment?” asks Mr. Howard. “Was her diction clear? Were her notes in time, did they match the pitch?” Collaboration is the rule in a good opera company, and everybody agrees that Rachel did very well.

“I didn’t grow up knowing anything about opera,” says Rachel’s proud mother Andrea Leplae. “The COC is very smartly growing a new audience.”

Even if the children don’t make the leap from Dino Dance to Donizetti, the program has opened up a wider world for many of them. “When I sing and act,“ says Esther, “I feel there’s a new me – I know I’m in someone else’s shoes and it’s fun.”