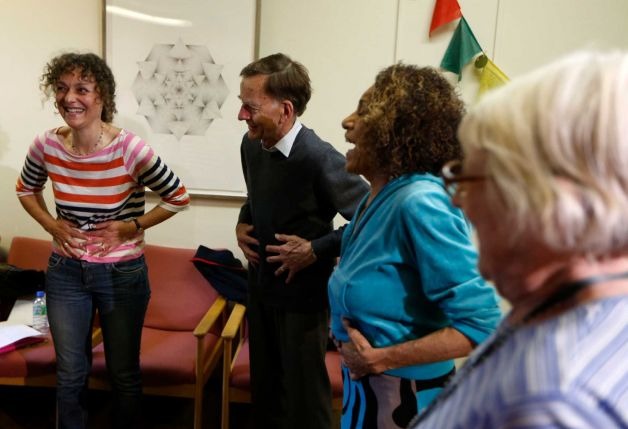 LONDON (AP) — In a third-floor room of a London hospital with orange and white walls draped with Tibetan prayer flags, roughly a dozen people gathered recently to perform vocal exercises and sing songs, including folk music from Ghana and Polynesia.

While the participants were drawn to the session by a fondness for music, they also had an ulterior motive for singing: to cope better with lung disease. The weekly group is led by a professional musician and is offered to people with respiratory problems including asthma, emphysema, and Chronic Obstructive Pulmonary Disorder, or COPD.

Doctors at London’s Royal Brompton Hospital started the program after reasoning that the kind of breathing used by singers might also help lung patients.

"Since many people enjoy singing, we thought it would help them associate controlling their breathing with something pleasant and positive rather than a standard physiotherapy technique," said Dr. Nicholas Hopkinson, the hospital’s top chest physician. "It’s almost accidental that they learn something about their breathing through singing," he said.

People with COPD have damaged lungs, which limits how much air they can breathe in and out. "Some people start to breathe very rapidly, which aggravates the problem," Hopkinson said. "They take many rapid, shallow breaths and that makes it even harder for them," he said. Hopkinson said learning to sing gives patients better posture and teaches them to breathe at a more manageable rate.

Still, two trials on the singing therapy conducted by Hopkinson and colleagues haven’t found much improvement in patients’ performance on breathing tests. "The lung function test doesn’t change because the underlying disease hasn’t changed," he explained. Hopkinson said that in a study comparing patients who went to the singing class versus those who attended a film discussion group, only the patients who sang reported feeling physically better afterwards, even if it couldn’t be measured objectively.

Other experts agreed the singing therapy was an unusual but worthy approach. "There’s a sound physiological rationale for this," said Dr. Norman Edelman, chief medical officer of the American Lung Association. "Controlled breathing, like the kind you might learn in singing, is very important because people with COPD should try to take deep breaths and slowly synchronize each breath when they’re doing something like walking up stairs," he said.

Some experts said singing would probably only appeal to a minority of patients and emphasized it could not replace traditional treatments. "Not everybody wants to sing but everybody can learn exercises to help them," said Julia Bott, a spokeswoman for Britain’s Chartered Society of Physiotherapy. She said other activities like yoga and tai chi had breathing techniques similar to the types of physio exercises respiratory patients are usually taught.

Bott also said the breathing techniques used for singing would probably only be helpful for people with mild problems. "If you’ve got severe disease, it will be pretty hard to sing if you’re panting and out of breath," she said. Bott said the songs used would also have to be pretty basic. "No one is going to be singing any Wagnerian operas after this," she said.

John Cameron Turner, 77, is convinced the singing classes have helped him breathe easier. Diagnosed with severe emphysema in 2002, Turner has tried various medicines but said none have really helped. "I have damaged lungs, but singing helps me use as much of them as possible," he said.

Since he started coming to the singing classes five years ago, Bott says he is able to do more things like gardening and walking. Turner said he used to have to stop repeatedly during the half-mile walk from his home to the subway station to catch his breath. "Now I don’t do that because I’m breathing better," he said.

Turner said it was hard to know if he was breathing easier just because of the singing but thought more people with lung difficulties should sing. "It’s turned me into a social animal and the songs are great fun," he said. "It’s such an easy thing to do that you might as well give it a try."