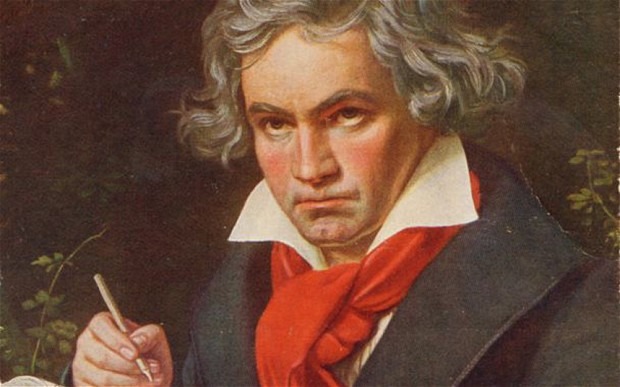 Dramatic: detail from a portrait of Beethoven by JK Stieler. Photo: Alamy

In recent weeks, some of my long-held assumptions about classical music, education, and the intersection between the two have been seriously challenged – by “MOOCs”, of all amazingly named things.

Because my ignorance knows no bounds, I had not heard of MOOCs – Massive Open Online Courses – until I was asked to teach one. If I had been asked what the term meant as recently as January, my best guess would have been that it was the sound made by a cow with a speech impediment.

Clearly I represent the benighted minority, for MOOCs have already attracted millions of learners and been much in the news; it’s too early to say that they have revolutionised education, but they certainly are raising all sorts of timely questions about it.

My involvement came about when Coursera, an education technology company which purveys – is purveys the word? – MOOCs, entered into a partnership with the Curtis Institute of Music, where I teach. Coursera has been in existence for only a year, and already has offered classes coming out of some rather august institutions – Princeton and Stanford among them. Still, the affiliation with Curtis represents new ground for Coursera: first of all, it is the first classical music conservatory they have joined forces with, and second, at less than 4 per cent, it is the undergraduate institution with the lowest acceptance rate in the United States. Until now, no Curtis course has been massive, online or, open.

This is an experiment, then. Purists might argue that a lecture on chemistry or history is simply not the same thing when viewed on a computer screen rather than in a classroom, but the content of the lecture needn’t be different. Lessons in a music school, however, take place in person and usually one-on-one for a number of very good reasons: the problems being addressed are unique to each student, often have a physical component, and require at least some dialogue between teacher and student.

So clearly the experience of Curtis, or any conservatory, cannot be replicated on the web. Rather, an online course on music offers an opportunity to reach music lovers in a new, and in my view, thrilling way. Instead of watering down music theory or history courses designed for serious, already highly trained music students, Curtis will be offering two classes designed for music lovers who don’t necessarily have previous experience studying an instrument. In addition to the course I’ll be giving, “Exploring the Beethoven Piano Sonatas”, there will be a class entitled “From the Repertoire: Western Music through Performance”, co-taught by Jonathan Coopersmith, the school’s Chair of Musical Studies, and David Ludwig of the composition faculty. In each of five lectures, the Beethoven course will address a particular aspect of his music, such as the evolution of his style, or the presence of improvisatory elements in the sonatas; while some theoretical discussion will be unavoidable, it will hardly be the point. These classes will thus offer “the Curtis experience” only in the limited sense that they will be taught by the same people who teach at the school, with a focus on performance, rather than musicology, as befits a conservatory.

From the moment this idea was floated to me, it seemed exciting – even a moderate technophobe like me was forced to admit that this was a case of the internet opening doors that had been firmly shut as recently as ten years ago. Still, I have been floored by the response to the class. In the six weeks since the class has been announced, without so much as a projected start date, nearly 7,500 people have signed up. That number is staggering from many points of view, but nothing drives it home quite like this: it is almost double the number of students who have attended Curtis throughout its 79-year history. Curtis’s exclusivity is a necessary ingredient in making it what it is: its tiny size is critical to its atmosphere, and ensures that its talented students get the attention that is so crucial to their development. But the advent of MOOCs means that the musical values discussed within the Institute’s walls can be shared with unprecedented numbers of people.

It is worth noting that it is easy – and free – to sign up for a Coursera class, and therefore there’s no guarantee that most of these people will finish the class. But in the past few weeks I’ve found myself thinking a great deal about who the enrollees are and what they hope to get out of the experience. Are these people The Converted – regular concertgoers who already own three versions of the complete Beethoven Sonatas and probably the Lewis Lockwood biography? Or are they people with limited background who have perhaps always felt a little threatened, a little alienated by classical music and the elaborate set of rituals around the way we listen to it?

What seems clear is that whatever their frame of reference, these people are in it for the learning; students who complete the class will get a “Certificate of Achievement”, which is nice, I suppose, but not useful in any tangible sense. And that is tremendously exciting. Nearly everywhere I perform, I witness hand-wringing about the future of the classical music audience, about the future of classical music itself. And I have heard an enormous number of unique theories as to where the problem lies: everything from unimaginative programming, to unsustainable economics, to unengaged artists.

I’m not ready to say those theories have no validity. But if 7,500 people are swiftly signing up for five hours of lectures on Beethoven, perhaps the core of the issue is really quite simple: people want to understand what they are listening to. After all, while the trappings of the concert hall might occasionally be alienating, what could be more alienating than feeling that the music you are listening to is a foreign language? Coming from a family of musicians, where Beethoven was in the house from my birth, it is easy for me to forget this. But I did once go to see a play in Japanese without English surtitles – it’s a long story – and if the experience of hearing a recital of Beethoven Sonatas without any classical music background is even a fraction as isolating and frustrating as that, that person will not be attending a second concert.

I am not yet in a position to say, prior to even teaching this class, that MOOCs are classical music’s silver bullet; I’m not even entirely convinced that classical music needs a silver bullet. But if they give a few people the opportunity to feel that the language of music isn’t foreign, that its grammar and its beauties and its mysteries are newly accessible to them, they will have done our community a huge service. The story of MOOCs and music is just beginning; I am genuinely excited to watch it unfold.