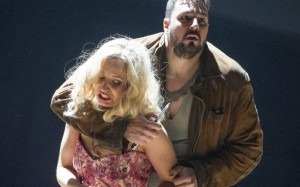 As the Met Opera prepares to stage only its second opera composed by a woman, the industry as a whole is finally fostering female talent.

Next season, the Metropolitan Opera will stage an opera written by a woman for only the second time in its history and the first time since 1903.

L’Amour de Loin, or “Love from Afar,” written by female Finnish composer Kaija Saariaho, premiered in 2000 at the Salzburg Festival and had its U.S. premiere at Santa Fe Opera in 2002. Full story.