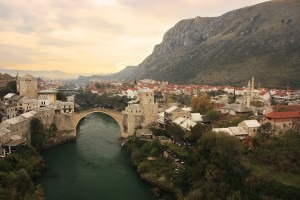 Stari Most is a monumental white stone bridge in the Bosnian city of Mostar. Rebuilt after obliteration during bombing in ’90s war, it stands as a symbol of unity between the city’s two sides: Croat and Bosnian. But as symbols go, it’s pretty empty.

It’s taken more than 20 years for a war-crimes tribunal to convict Radovan Karadzic for his genocidal acts in the civil war that turned Serbs, Croats and Bosnians into enemies. And a recent municipal survey shows that more than 50 percent of locals under the age of 18 say they have never interacted with someone from “the other side.” But there’s a more powerful bridge here than Stari Most. You might call them dreamers, but an unlikely force is chipping away at deeply entrenched divisiveness. Meet the Pavarotti Music Center and the Youth Cultural Center Abrašević, two collectives (one on each side of the river) desperately trying to bring together young people from both sides — not through mediation or counseling or government programs but through song and dance. Full story.