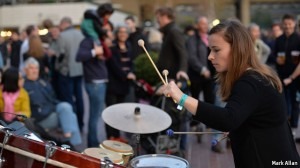 ANNA GOLDSWORTHY, an Australian pianist and festival director, wrote recently about her fears for her art-form as she played Chopin’s funeral-march in B-flat minor. Though we are all headed towards our own funerals, “it is difficult to escape the fact that my audience is several decades further down the road than I am. And I am less and less confident that a new audience will come marching in to replace them.”

Her fears are not outlandish: a 2010 study by the Australian Bureau of Statistics found the largest proportion of classical concert-goers are aged between 65 and 74, and the same problem is bemoaned far beyond Australia. So promoters and classical-music venues are keen to do anything that will lure in youngsters. There is some evidence that their initiatives are bearing fruit: in 2015, more than 37,500 people bought their first tickets for the BBC Proms, a concert series held in London’s Victoria & Albert Hall every summer since 1895. Over 8,600 under-18s attended concerts across the entire season, many of them standing in a pit in the classic “promming” experience, reminiscent of a rock concert. Carnegie Hall, a venerable New York venue, has seen a decline in the age of those attending single concerts from 58 in 2006 to 48 in 2014 (though given the breadth of Carnegie Hall’s offerings it is hard to be sure whether it is classical or contemporary fare pulling in the punters). Full story.