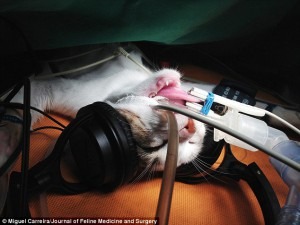 The cats were played clips of music through headphones while undergoing surgery, shown above, a heart monitor attached to their tongue measured their pulse and scientists recorded the diameter of their pupils

– Scientists at the University of Lisbon, Portugal, fitted headphones to cats
– They recorded the cats’ breathing and pupil size while undergoing surgery
– The cats were calmer when listening to Samuel Barber’s Adagio for Strings
– When played AC/DC’s Thunderstruck, their vital signs showed more stress while pop music like Natalie Imbruglia’s Torn gave intermediate results

According to musical myth, the strings of violins were once made from cat guts.

Yet despite this, it seems that playing your pet a piece of classical violin music may be the best way to make them relax, according to new research.

Scientists have found that playing Samuel Barber’s Adagio for Strings can calm cats and may even help them recover quicker after a visit to the vets. Full story.