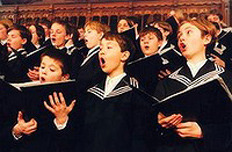 Members of the St Thomas Boys Choir in Leipzig.

FOR 800 years, the St Thomas Boys Choir in Leipzig, Germany, has been filling churches with pure young voices. Now it is witnessing a confounding phenomenon: each year, those voices are cracking just a little earlier than the year before.

When the choir’s manager, Stefan Altner, started working at the choir in 1993, most voices broke when boys were 14 or 15. Now the average is closer to 13.

Other boys choirs have noticed it, too. Over recent decades, the already short careers of their sopranos have started to end between six months and a year earlier, challenging them at times such as Easter, for which choral music such as J. S. Bach’s St Mat-thew Passion was written with difficult lines for boys free of hormonal woes.

At the venerable St Thomas Church, where Bach himself once drilled pupils in their musical scales, leaders have redoubled their recruitment efforts and taken in boys at a younger age to make sure that the choir has a full stock of voices, from the deepest bass to the most clarion-pure soprano.
Advertisement

The cause of the shift remains unclear, but some choir leaders say it is having a subtle effect on the music. The younger the boy, the less life experience and maturity underpins the complex emotions in what they sing, even if they are more willing to study their scores instead of pining about romance.

“We have only a short time, from age nine until 12, to squeeze in all the musical training for the boys,” Mr Altner said.

Since most boys join the choir when they are nine, even small changes are felt in the balance of the singers, he said, because after their voices deepen, the boys sing lower lines or drop out of the choir completely. In 2008, the choir added a nursery school, and in 2010, it opened a primary school as a way to identify and attract talent at a younger age.

While some data indicates puberty is starting earlier in girls, at least in the US, less attention has been focused on boys. Hypotheses about possible causes of earlier puberty in girls include improved nutrition, increased obesity, exposure to chemicals that mimic estrogen and changes in social pressures.

Some studies have suggested that puberty may be starting earlier among boys, but scientists say more research is needed.

“That puberty might start earlier in boys nowadays than it did decades ago is likely,” said Jean-Pierre Bourguignon, a professor of paediatric science at the University of Liege. But he cautioned that a change in the timing of when boys’ voices broke could, in theory, be separate from a shift in puberty as a whole.

In Leipzig, the issue has inspired local research and efforts to prolong the boys’ soprano careers by keeping them singing high parts until their voices change.