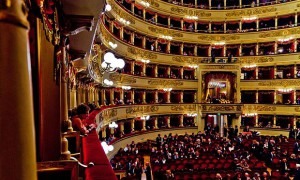 The news arrived a couple of days ago that Roberto Alagna, the Parisian tenor of Sicilian origin, has decided not to return to La Scala this November as Massenet’s Werther after an eight-year absence. The reason: he did not want to endure the catcalls of the loggionisti, those self-appointed arbiters of taste and guardians of tradition, who like to boo, jeer and audibly comment during performances.

This announcement was considered so newsworthy that I was asked to appear on BBC Radio Four’s program, Front Row, to give my views. I was described as “the New York Times opera critic,” which I am not, but otherwise I think the conversation effectively describes the phenomenon of the loggionisti. You may listen to it here.

In December 2006, Roberto Alagna was booed after his first aria in Aïda and decided to quit the performance in the middle of the scene. He was replaced by Antonello Palombi, who was shoved onstage in his jeans and sport shirt to sing opposite Violeta Urmana in full Ethiopian dress.

Afterwards, angry charges flew back and forth between Alagna, who described some in the audience as maleducati while certain members of the audience—those from the loggione (the uppermost tier of the theater) said similar things about him. The word maleducato is akin to the curses hot-blooded Italian opera characters hurl at one another: “A te, la mala Pasqua!” and “Ti maledico!” in that the root is male, or bad (but think of it as really bad).

Maleducato is one of the most severe words in the Italian language. To translate it as “badly educated” does not convey the full force and intensity of its meaning. When someone tells another person he is maleducato, the message is that the person is uncouth, badly mannered and worthy of being a social outcast. This in a language in which all kinds of nasty words and expressions—often a combination of the anatomical, scatological and anticlerical—flow freely from people who are not ashamed or concerned that such foul speech would give them una brutta figura.

Putting aside the bad language, the behavior of certain loggionisti is often so extreme that it has become damaging to La Scala. Many top singers refuse to appear there because they do not want to endure the abuse that comes from the loggione. Last March, incoming general manager Alexander Pereira said the loggionisti (and their effect on scaring away talent) were the thing that frightened him most about taking over the theater. As things turned out, he will only be in charge until the end of 2015.

Throughout the company’s history, there have been demonstrations during performances when fans of one singer have booed another. In many theaters in the past there used to be the claque, audience members who—for pay—would cheer one singer and jeer another (if the paying singer wanted it). While the claque has died out as a phenomenon in most countries, it still persists in some Italian theaters.

A leading soprano told me that, when she was just starting out two decades ago and was making her La Scala debut, she was approached by members of the claque and told that if she gave them money they would cheer especially loud for her and, if she wished, would boo someone else. Implicit too was that if she did not pay the claque, they might boo her instead. These cold-blooded deals remind me of the manner in which Sparafucile makes his murderous business proposition to Rigoletto. The soprano did not pay the claque and had a successful debut. She returns to Milan every so often, but is heard much more often in other major houses—this is La Scala’s loss.

Listen to this interview in which Beverly Sills speaks, demurely, about the behavior of the Milanese audience as well as the unpredictability of who might sing and conduct on any given night. That was often the situation at La Scala in the 1970s, but the company is very well-run today in most regards. And yet the hyper-reactive loggionisti still audibly voice their dissatisfaction with what they are hearing or who is on the stage.

In 1992, Luciano Pavarotti sang his first Don Carlo in a rare, late-career return to La Scala and suffered the wrath of the loggionisti. Near the start of the opera his voice cracked on a few notes, but this happens to many singers in this daunting role. It is not unlike hearing a great pianist such as Rubenstein or Horowitz hit a few wrong notes. We can acknowledge their human imperfection but still revel in their incredible talents and artistry. I was there for the Don Carlo and heard a lot of gorgeous singing. I was glad Pavarotti added the role to his repertory at a time when he could have rested on his laurels. Here is a link to a television broadcast of the complete performance:

A couple of years ago, some loggionisti thought Daniel Barenboim was conducting too slowly and yelled out, “È troppo lento!” (“It’s too slow!”). Whether that was the case or not, it ruined the experience for many audience members and is just plain rude….dare I say maleducato? There is a huge difference between booing after a performance which, like it or not, happens in many countries, and the yelling, hissing, whistling (which, in Italy, is a negative response) that takes place at La Scala.

Here is a memorable moment, likely filmed from the loggione, of Cecilia Bartoli and Daniel Barenboim performing “Non più mesta” from Rossini’s La Cenerentola. At the start, the conductor is seen admonishing the audience “state zitti” (a slightly politer translation of “Shut the F— Up!”) Bartoli then dispatches her customary rapid-fire coloratura including a couple of moments aimed directly at the loggionisti. At the end, most of the audience is with her.

There are times when the loggionisti protest after a performance and some justification might be found for their reactions. In 2013, a new production of Macbeth was cascaded with boos at the curtain call, as you can hear. At 2’32”, someone yells at the production team, “Cambia mestiere!” (Go into a different profession!). Many audience members were observing a time-honored tradition of rejecting a mediocre new production that replaces a historic one—in this case, the legendary Macbeth by Giorgio Strehler that had once starred Shirley Verrett and Piero Cappuccilli with conducting by Claudio Abbado.

My personal choice, when I see or hear a performance I do not like, is to simply fold my arms rather than applaud or boo. I do the same when there is an awful production, though I am more than happy to discuss afterwards why I think it was bad. I am all for passionate audiences and lament when I see those in the U.S. give the same tepid response to fabulous performances as they do routine ones. I love it when audiences go wild with happiness in places such as Munich and Barcelona. But, Signor Loggionista, there is never a place for interrupting a performance with your personal opinion because, frankly, we buy tickets to hear opera singers, conductors and orchestras – and not to hear you!