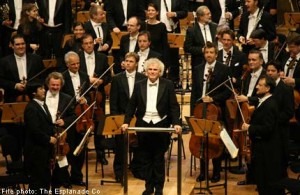 BERLIN — The Berlin Philharmonic has dropped out of the Salzburg Easter Festival, effective in 2013, and is moving its annual springtime festival to Baden-Baden instead.

Peter Alward, who took over as executive director of the Salzburg Easter Festival just last year, and Managing Director Bernd Gaubert were informed late Friday of the Philharmonic’s withdraw (a press statement was released at 10:30 p.m. Central European Time).

Alward commented, “I deeply regret this decision by the Berlin Philharmonic. When I took over the management of the festival at the request of the orchestra…, the programs for 2010 through 2013 were already fixed. Therefore, it was not possible for me to work together with the orchestra on future plans.”

The orchestra’s demands to increase the number of opera performances from two to four, and expand the Counterpoint chamber music series and education programs were not financially realistic, according to Alward.

Herbert von Karajan created the Salzburg Easter Festival in 1967 as a springtime residence for his Berlin Philharmonic and to give it a chance to play fully-staged operas (and for him to conduct and stage his own “Ring” Cycle). This was likely (but never so stated) because he was jealous of the Vienna Philharmonic, which had the much longer summertime Salzburg Festival as its summer residence and always played a number of operas in the pit, plus a concert series. The Berlin Philharmonic has no summer home.

Since Von Karajan, Berlin’s subsequent music directors, Claudio Abbado and Rattle, have been the de facto artistic directors of the Salzburg Easter Festival.

From her home in Anif, in the south of the State of Salzburg, Eliette von Karajan, the conductor’s widow, issued the following statement on Saturday:

“It was with great surprise that I learned of the Berlin Philharmonic’s decision to move the festival to Baden-Baden. After the resolution to recent financial scandals, I was confident that the Salzburg Easter Festival would proceed with its new team, a new program design and new partners.

“I was Herbert’s companion at the festival since 1967 and by myself for 22 years [since his death in 1989]. I will be using all the power and energy I have left, together with the team of the Salzburg Easter Festival, to find a solution to continue the Easter Festival in Salzburg, and to offer joy to our loyal audience with performances of the highest artistic level.”

Calling the festival “essential” for Salzburg, Alward was optimistic that, after consulting with its trustees, the festival would experience “an artistic and economic rebirth in 2013.”

In Baden-Baden, artistic direction for opera and concerts will be in the hands of the Berlin Philharmonic Foundation in cooperation with the leadership of the Festspielhaus Baden- Baden. New productions will have their premieres there, followed by four performances, as opposed to the usual two, in Salzburg. The recently-announced cooperation between the Salzburg Easter Festival and the Teatro Real in Madrid will continue even after the move to Baden-Baden.

“We had a wonderful time in Salzburg since 1967 and look forward to the future in Baden-Baden,” said Martin Hoffman, director of the Berlin Philharmonic Foundation.

The 2012 Salzburg Easter Festival will proceed as scheduled, with two performances of “Carmen” conducted by Sir Simon Rattle, as well as concerts and the Counterpoint chamber music series. As such, “The orchestra is pleased to have the opportunity to bid a musical farewell to Easter in Salzburg,” said Hoffmann. “The decision to move to Baden-Baden was adopted after great and careful consideration on the part of a general assembly of the orchestra.”

Said Rattle, “The whole town of Baden-Baden is looking forward to the Berlin Philharmonic and the audience will be a perfect host.”