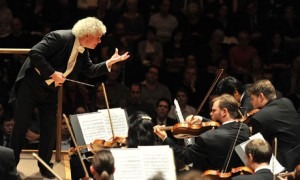 BERLIN — The Berlin Philharmonic announced its 2011-2012 season in the foyer of the Philharmonie Monday afternoon, with Intendant Martin Hoffmann joined by Music Director Sir Simon Rattle, board member/oboist Andreas Wittmann and principal cello/general manager of Berlin Phil Media GmbH Olaf Maninger. There was also further discussion of the orchestra’s withdrawal from the Salzburg Easter Festival, about which more later.

With a glowing smile, Rattle launched the proceedings, in English, with news that the orchestra would be completing its Mahler cycle with the Seventh, Eighth and Ninth Symphonies as well as “Das Lied von der Erde,” juxtaposed with works by composers such as Helmut Lachenmann and Thomas Tallis. The season, he said, will also explore the 1890s when “music started to change a great deal.” As examples, he noted Bruckner and his later works’ stylistic proximity to Schönberg, Dvorak’s “New World” Symphony and Strauss’s “Ein Heldenleben.” British music is also a thread, especially since conductors Barenboim and Runnicles both expressed interest in conducting Elgar.

Luciano Berio is represented with four of his “Sequenza”s for solo instruments, giving the orchestra’s principals a chance to shine. Seven premieres are planned, including Osvaldo Golijov’s Violin Concerto, performed by Leonidas Kavakos with the L.A. Philharmonic under Dudamel last month, and an oratorio titled “Weltethos” for speaker, chorus and children’s chorus by Jonathan Harvey, described by Rattle as the most “European and spiritual” of UK composers. Swiss theologian Hans Küng provides the text. The remaining premieres are chamber works.

New “Late Night” concerts of 20th-century works will start at 10:30 p.m., free to those who have attended prior concerts and 10 Euros for those who have not. Rattle will conduct all five of them, with his wife Magdalena Kozena performing works by Manuel de Falla and Berio for the first two concerts in October. Further innovations include joining forces with choreographer Sasha Waltz both in performances and educational programming.

The sole conductorial debut is that of the young Spaniard Pablo Heras-Casado. Known for contemporary music, he will be conduct Berio, Szymanowski and Mendelssohn, a program that, to Rattle’s mind, indicates he is a “fascinating person.” Seiji Ozawa, if in good health, will lead an al fresco concert at the “Waldbühne” arena. Murray Perahia succeeds Leif Ove Andsnes as pianist in residence, and Evgeny Kissin is the featured New Year’s concert soloist.

High-tech action includes the broadcast of three performances in movie theaters across Europe, and the continuation of the Digital Concert Hall, an online streaming service said to have 5,000 subscribers. Maninger claimed that the orchestra’s success with online communities such as Facebook (currently with 200,000 friends) places the Philharmonic “far ahead of other classical music institutions” and allows it to generate discussion among young individuals.

As to the orchestra’s rocky divorce with its Austrian neighbors, Hoffmann maintained that Salzburg was unable to accommodate the orchestra’s desire to expand the festival structurally or financially. Hoffman explained that the orchestra’s wish to increase the number of operas performances from two to four was impossible to realize in Salzburg. Baden-Baden, by contrast, will allow for not only the full number but an extensive chamber music series and, eventually, an international orchestral academy.

It will also, according to Hoffmann, enable the orchestra to continue its mission of reaching out to a younger audience, in part by reducing ticket prices, which would have been impossible in Salzburg.

“It’s a chance for a new path,” said Rattle, adding that, while the circumstances will pose competition to the Salzburg Festival, he wished his former colleagues an equally fruitful new beginning. The orchestra will perform “Carmen” in Salzburg as planned in 2012.

The Philharmonic has a glossy new logo, to be launched next season, and tours will take it across Asia in November and to Carnegie Hall for a residency in February 2012.