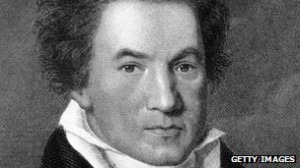 Beethoven began to lose his hearing
in his late twenties

As his hearing got worse, he favoured lower and middle-range notes in his music, scientists have said in the British Medical Journal.

An analysis of Beethoven’s music has found that once he became totally deaf, he began to use high notes again.

Researchers say the findings explain Beethoven’s music, which has always been divided into three periods.

The stages of his career mark the early, middle, and late periods of his musical compositions.

Researchers from the University of Amsterdam, have found his early quartets (opus 18, 1798-1800) used a variety of high notes.

Beethoven, who suffered from a severe form of tinnitus, first mentioned his hearing problems in 1801 in a letter to Franz Wegeler and Karl Amenda.

He wrote: “In the theatre I have to get very close to the orchestra to understand the performers, and that from a distance I do not hear the high notes of the instruments and the singers’ voices.”

By 1810, when he composed the opus 74 and 95 quartets, the amount of high notes he used dropped significantly, tending towards lower frequency notes.

But the higher registers increased again in 1825, when he wrote the late string quartets opus 127 to 135 and it was thought he had become completely deaf.

The report’s author Edoardo Saccenti said: “These results suggest that, as deafness progressed, Beethoven tended to use middle and low frequency notes, which he could hear better when music was performed, seemingly seeking for an auditory feedback loop.

“When he came to rely completely on his inner ear he was no longer compelled to produce music he could actually hear when performed and slowly returned to his inner musical world and earlier composing experiences.”

However, the researchers have admitted the findings are not conclusive as they used a limited number of Beethoven’s compositions.

A fuller picture would require a “complete and exhaustive statistical and spectral analyses of the composer’s complete catalogue”.