Media
Beethoven’s brain is a lot like yours
May 23rd, 2012
Tags: research 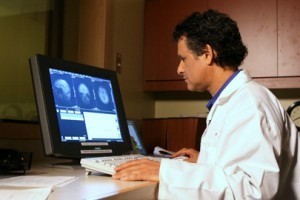 Daniel Levitan studies three different slides of the same brain of a person listening to music.

“Opera ain’t nothin’ but a bunch of hollering, but it’s high class hollering.”

His mission is to demystify classical music and open it up to those who might have felt it was too distant or difficult for them to enjoy.

“I want to empower the listener to realize music is meaningful and interesting without any prior background,” he says in an interview from Vancouver where he was made a fellow of the American Association for the Advancement of Science for “bringing science to the public.”

The McGill University professor of psychology and neuroscience is also a musician, playing the clarinet, sax, guitar and electric bass in both jazz and rock bands. It’s been a natural progression to join the two interests in his research, he says.

Levitin is adamant that you don’t have to know a thing about classical music to enjoy — and participate in — the concert Beethoven and Your Brain on Feb. 25.

This is the second time Koerner Hall has hosted the neuroscience-classical music mashup which gives audience members hand-held clickers to register their responses. A number of times during the concert by the Kitchener-Waterloo Symphony, the audience is asked questions and the responses are demonstrated on a large overhead screen.

Last year’s experiment has ended up in a research paper titled for Memory for Musical Key in a Real Time Symphony Performance currently being written by Levitin and conductor Edwin Outwater.

One of the most startling findings of last year’s concert was the ability of the audience to correctly select the key of a piece of music, he says.

“They knew a lot more about music than they thought they did.”

Outwater, the musical director of the Kitchener-Waterloo Symphony, also has a background in rock both as a performer and conductor, including conducting Cheap Trick at the Hollywood Bowl.

He says Beethoven and Your Brain began “as an explanation of classical music and how your brain reacts,” but has expanded since its inception last year.

It is now a full two hours after the audience asked for more participation, he says, and there will be more interaction with questions and explanations from Outwater and Levitin between musical pieces.

Outwater says, “We realized the audience was experiencing music on a primal level even if they don’t know a lot about it.”

Classical music suffers from the “feeling one is supposed to know something about” and it is incumbent on people in the field to break down barriers between listener and musical styles, he says.

“Everyone wants new audiences and to make them feel welcome.”

Last year’s concert drew an eclectic audience of intellectually curious people who were interested in science or music or just having a stimulating evening’s entertainment, he says. When over 90 per cent of the audience predicted the accurate musical key, Outwater says it was like a light bulb going on.

“They’re saying, wait, I do know something. As a conductor, it is something I see over and over again.”

The orchestra will play Beethoven’s Symphony No. 5 and portions of No. 9 and No. 3.