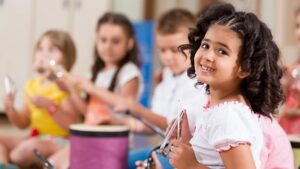 Over the last decade or so, we have seen some landmark initiatives that helped raise awareness of the importance of school-based music education. These include the ABC’s three-part documentary Don’t Stop the Music that screened in 2018, ARIA’s Music Teacher of the Year Award which commenced in 2017, and Music Australia’s own national schools program Music: Count Us In (MCUI), which started in 2007.

Well in the UK, the BBC recently launched a music education campaign for children aged 4-7, and it shares some elements in common with these programs here in Australia. Called Bring the Noise, it is intended to support primary school teachers who need help and resources to teach music classes. Its aim being to “inspire children to become musicians and see the joys of music-making”, the campaign emphasises what is easy and engaging for kids in the classroom. Full story.