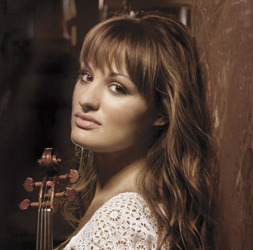 Nicola Benedetti, the CBSO and BBC ensembles to perform

The BBC has announced a nationwide celebration of the UK’s orchestras and live music to take place in March 2012.

The ‘Music Nation’ festival will take place over one weekend and will include concerts, workshops and community projects in 45 venues from the Shetland Isles to Cornwall.

Highlights of the festival include flashmob performances of Mozart’s The Marriage of Figaro in Wales, Wagner’s Tristan and Isolde in Birmingham performed by the City of Birmingham Symphony Orchestra under Andris Nelsons, and an appearance by violinist Nicola Benedetti (above) in Glasgow.

James MacMillan has also written a new fanfare for the festival and singer and songwriter Rufus Wainwright has written a setting of five Shakespeare sonnets to be performed by the BBC Symphony Orchestra.

The festival focuses on classical music but also includes world music, urban and folk. In Bradford, South Asian arts organization Kala Sangam will be performing while London’s Barbican will host ‘Urban Classic’, a collaboration between urban artists and symphony orchestras.

The festival will take place 3-4 March 2012 and is part of the countdown to London 2012, the finale of the Cultural Olympiad.