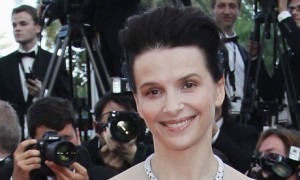 Juliette Binoche is to star in August Strindberg's play Mademoiselle Julie at the Barbican in 2012. Photograph: Andreas Rentz/Getty Images

The Barbican arts centre in London will celebrate next year’s Olympics with an “unparalleled” lineup of international stars, including the actors Juliette Binoche and Cate Blanchett; stage directors Yukio Ninagawa and Peter Sellars; and the first UK performance of Einstein on the Beach, the opera that four decades ago made the reputations of Philip Glass and Robert Wilson.

The centre will host the biggest exhibition in the UK for 40 years on the Bauhaus design school, which flourished in the 1920s and early 30s.

“In 2012, London welcomes the world for the Olympic and Paralympic Games, and the Barbican will be at the forefront of that international moment with an extraordinary range of cultural experiences for all,” said Barbican director Sir Nicholas Kenyon.

He predicted that London will “punch above its weight” in the arts festival, and promised “something for everyone”, both within the concrete bunker of its Barbican home and in many events across the capital.

“This is not an imported rent-a-festival that is happening all through the world. It is a real collection of things that we believe in that represent the Barbican values.”

Kenyon can afford his starry spending spree because the Barbican – whose core funding comes from the City of London – will receive a special grant of £700,000 from the London Olympics organisers to join the nationwide arts festival planned to coincide with the Games.

The Barbican also pulled off a funding coup recognising its eclectic programming – which is both popular and critically acclaimed – when it won a substantial increase in Arts Council funding at a time when hundreds of other organisations were being slashed.

Programme director Louise Jeffreys said the Barbican represented the Bauhaus principles in breaking down divisions between art forms. “We continue to push forward the pioneering spirit. In 2012 stars of stage and screen will rub shoulders with first-timers, international artists will meet local people, and the traditional will meet the new.”

The Bauhaus exhibition, Art as Life, will track the design school from its founding in 1919 by Walter Gropius, to its last director, the architect Mies van der Rohe, and its forced closure in 1933 by the Nazis, who detested its radical modernist ethos. The exhibition will include painting, sculpture, film, photography, textiles, ceramics and architecture.

French film star Binoche, who made an acclaimed debut on the London stage at the National Theatre in a dance piece with the choreographer Akram Khan, will return in a more conventional acting role, in Mademoiselle Julie, a new version – in French – of August Strindberg’s play about seething class and sexual tensions, with costumes by couture house Lanvin.

The Australian actor Cate Blanchett, star of the 1998 film Elizabeth – and better known to a younger audience as Galadriel in The Lord of the Rings – returns to the London stage after 13 years in a new version by the British playwright Martin Crimp of the German play Gross und Klein, in the role of a lonely wife implausibly deserted by her husband. The show will be a co-production between the Barbican and the Sydney theatre company Blanchett runs with her husband.

Co-productions are a feature of the programme: the Barbican is getting together with Sadler’s Wells for the first time to bring in one of the most acclaimed dance companies in the world, the Tanztheater Wuppertal Pina Bausch in a month-long season across the two venues.

Classical stars include the New York Philharmonic, the Concertgebouw orchestra from Amsterdam, and the Kronos quartet, which will also play a concert at the Hackney Empire in east London.

Ninagawa, renowned for his take on Shakespeare, will direct a new version of Cymbeline in Japanese, and the theatre season will also include a major new production by Simon McBurney for the Complicite company.

The author and academic Toni Morrison is working with Rokia Traore, a singer and song writer from Mali, on Desdemona, a performance incorporating traditional African instruments inspired by an invisible character in Shakespeare’s play, his heroine’s African nurse Barbary.

Other music highlights will include the return of Sir Simon Rattle as conductor with the London Symphony Orchestra. African and western musicians will also unite in Africa Express, the collective founded by Damon Albarn, which will visit UK towns and cities on its most ambitious tour to date, with the Barbican as executive producer.