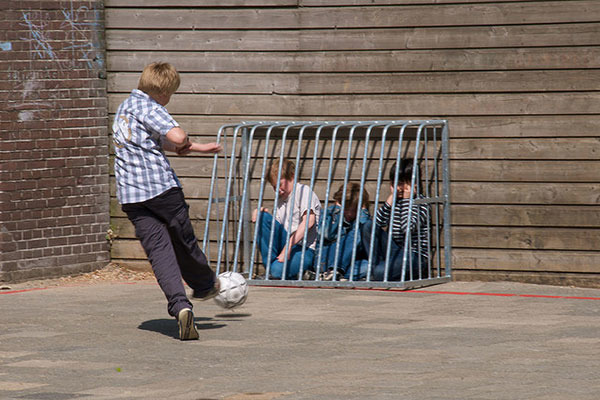 Can music soothe the savage sixth grader? Perhaps, according to a first-of-its-kind study from Israel, which finds that gentle melodies may help deter schoolyard bullying.

“If the findings of this pilot study are replicated and can be generalized,” researchers Naomi Ziv and Einat Dolev write in the journal Children and Schools, “they point to a very simple, inexpensive method of reducing aggressive behavior.”

The three-week experiment featured 56 students—32 boys and 24 girls—at a local elementary school in the north of Israel. All were either 11 or 12 years old. For the first week, the researchers quietly observed the kids during their 20-minute mid-day recess. For three days of the second week, relaxing music from the CD The Spirit of Yoga was played on speakers throughout the recess. The numbers, such as “Horizon of Gold” and “Mother’s Wingspan,” were described as “world music with a strong Indian influence.” And for the third week, the music was turned off, and recess proceeded as before.

On three consecutive days during each of the three weeks, the kids filled out a questionnaire just after returning from recess. They reported whether they had been bullied, either directly (such as being insulted or hit) or indirectly (such as being excluded from play, or being gossiped about). They also described the degree to which they felt tension, anxiety, or fear on the school playground.

The results were striking. “Occurrences of direct and indirect bullying were both significantly reduced during the three days when calming background music was played at the school,” the researchers report. “Furthermore, the participants reported lower levels of arousal and anxiety during recess, and enjoyed the recess more with background music.”

During the third week, when the music-free recesses resumed, the level of reported bullying went up, but it remained significantly below that of the first week. This suggests the music’s calming effect did not dissipate as soon at it was turned off.

That’s important, since, as the researchers note, people tend to acclimate to their surroundings, and music played every day “could lose its effectiveness after a certain period of time.” Perhaps a booster shot of music, offered on a periodic basis, could keep bullying levels low.

This was a small pilot study with acknowledged limitations. The children involved were aware of its intent, and the level of bullying was determined by their own subjective assessments. Presumably, the next step will be a larger-scale experiment in which the kids are ignorant of the researchers’ thesis, and their behavior is judged by outside experts.
Nevertheless—and given the costs of bullying and the ineffectiveness of so many prevention programs—the researchers call their results “very encouraging,” noting that their results suggest “music may be another tool to be used in certain contexts to create a calmer, more positive atmosphere, and influence children’s behavior and feelings to reduce aggressive behavior.”

A bit of harmony in the background may produce more harmony on the playground.