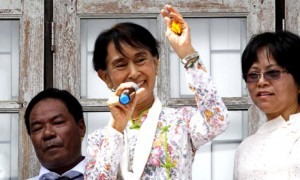 Gently persuasive as an orator. But she knows how to take it out of a piano.
Aung San Suu Kyi campaigning
in Burma earlier this year.
Photograph: Barbara Walton/EPA

A piano was one of the symbols of her lonely fight against political oppression. Now her name has been given to a new gold medal by Fanny Waterman, another great woman of our times

The inspirational Burmese opposition leader Aung San Suu Kyi has accepted the position of honorary ambassador for the Leeds International Piano Competition which take place in August and September.

The top prize in the event, a gold medal to celebrate the 50 years since the competition was founded, is also to be named after the charismatic 67-year-old whose 15 lonely years of house arrest were relieved, to a small extent, by her love of amateur piano playing.

Supporters outside her compound used to listen out for the music as a reassurance that she was still alive and keeping up her spirits. She also, famously, took her frustrations out on the simple Yamaha upright she owned, telling the journalist John Pilger (and a succession of piano repairers) how she had played so angrily on occasion that she broke strings.

Her link with Leeds acknowledges not just this but a second remarkable woman who is now 92, the founder of the piano competition Dame Fanny Waterman. Unstoppable, lively, imaginative and modest, the former music teacher has not faced prison or the military, but countless tedious obstacles, bureaucratic hurdles and – in the early days of event – pessimistic sceptics whose doubts have been long since swept aside.

In this, our special golden anniversary year, this is the greatest honour our piano competition has ever received.

The Leeds International Piano Competition is one of the great classical music competitions in the world. It’s a tremendous advert for Leeds and for Britain as a whole. Aung San Suu Kyi’s appreciation of piano playing is well known. So it is fantastic that the competition has made this tribute to Daw Aung San Suu Kyi. And it is a fitting way to end her brilliant and historic visit to Britain.

Leeds is glowing with international virtue just now, after the recent successful visit of the Dalai Lama, in the face of disapproval from some Chinese Olympic officials whose sportsmen and women are using the city as a base for London 2012.

This year’s competition runs from 29th August to 16th September 2012 with 80 entrants from over 20 countries short-listed from an initial 270 applications. Six finalists will perform with the Hallé Orchestra, conducted by Sir Mark Elder, at Leeds Town Hall on Friday 14 and Saturday 15 September, before the winner is chosen.

The top prize, which includes £18,000 in cash and a string of bookings with UK and international orchestras, has grown in prestige as previous winners have progressed to great careers. They include Murray Perahia, Radu Lupu, Andras Schiff, Mitsuko Uchida, Lars Vogt, Louis Lortie and Artur Pizarro.Tickets are available online from the Leeds International Concert Season website at or tel +44 (0)113 224 3801. They cost: £5.00 per session for Stages 1 & 2; £6.00 for the Semi-Finals and from £14.00 to £48.00 for the Finals.

All information about the Leeds International Piano Competition is here.