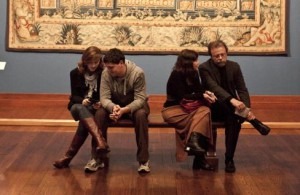 Patrons take a break at an Art After Dark event at the Speed Art Museum in Louisville.
credit: Marty Pear, The (Louisville, Ky.) Courier-Journal

LOUISVILLE – For much of the past 50 years, Louisville-area arts groups have had a cozy relationship with patrons like Kathleen Geile.

Geile is a 69-year-old pre-baby boomer who grew up with the arts. She holds season tickets to performances by the Louisville Orchestra, the Kentucky Opera and the Louisville Ballet; and she attends other events, including plays at Actors Theatre of Louisville and at smaller theater companies around town.

“Art takes us out of our everyday life; it speaks to us,” Geile said.

But in the past decade, the aging of such lifelong patrons has triggered alarms about the graying and shrinking of arts audiences in Louisville and across the nation.

Many long-established local arts groups acknowledge an aging audience base and are seeing significant drops in the number of season ticket-holders. But they say they’re creating new ways to attract diverse crowds and are seeing some positive results.

Still, some industry experts and young adults say the changes aren’t coming quickly enough for many arts groups.
A report conducted three years ago by the National Endowment for the Arts showed that nearly 35 percent of adults — 78 million people nationwide — attended an arts performance or visited an art museum in 2008, down from 40 percent in similar studies in 1982, 1992 and 2002.

The steepest drop was among people ages 45 to 54.

The findings are “deeply disturbing to all of us who care about the arts in our country,” said Rocco Landesman, chairman of the National Endowment for the Arts.

To better understand the decline, the agency commissioned a study of America’s arts audience. It found that since the 1950s, arts groups have built their programming — and futures — around people at the threshold of the baby boomer generation.

For the most part, once people in this generation reached age 25, they had graduated from school, started a job, gotten married, set up their own household and had children. At the same time, many of them, especially those with higher levels of education, formed links to well-established arts groups, including orchestras, opera companies and museums.

These devoted arts patrons were known as omnivores and were a substantial part of the population.

But in the 1970s, fewer young people were following that path into adulthood and into the arts, resulting in fewer broad-interest arts patrons, said Mark Stern, a sociologist and University of Pennsylvania professor who examined the behaviors of this group and their effect on the arts in a report he wrote for the National Endowment for the Arts.

The report, released in February 2011, shows that as younger people became a larger part of the population, the percentage of devoted arts patrons declined from 15 percent in 1982 to 10 percent in 2008.

Many Louisville-area arts groups have seen evidence of this decline in their season ticket sales, which have been the bedrock of their business plans.

Actors Theatre managing director Jennifer Bielstein said the theater has seen a slow decline in season ticket-holders since 1989, spurring the staff to change some marketing strategies to stabilize its revenue.

“We’ve increased single ticket sales,” she said. “It simply requires more marketing to attract a single ticket buyer.”
Arts organizations nationwide are being forced to make the same kind of business changes, according to experts.

“There are generational shifts going on that are affecting all arts groups,” said Alan Brown, co-founder of WolfBrown Associates, a consulting firm with six offices throughout the country that helps arts organizations maintain their viability and audience in a rapidly changing world.

“There will always be people who enjoy traditional concerts in concert halls at 8 p.m., and that’s great. And we need to create experiences for those people,” Brown said in a recent telephone interview. “But there’s a growing diversity of arts consumers who enjoy a wider range of experiences that are often not being addressed.”

Nick Phelps, 26, is one of those diverse arts consumers. He works for a software development consulting company and is committed to donating his time and money to the arts via a program with the Louisville Fund for the Arts. He said he wants arts groups to “challenge the status quo.”

“The arts scene has to respond to what people want and like; what worked four years ago might not work today,” Phelps said.

Richard Evans, an arts industry expert and president of the New York-based consulting firm EmcArts, called this “a very turbulent time of transition” for the arts. It’s been brought on not only by the decline of Geile’s generation, he said, but the end of a half-century marked by growing and professionalizing the arts. Now, people want the arts to be more relevant to their lives, he said.

The Louisville Orchestra is among the local arts organizations trying to change.

CEO Robert Birman said in the past five years, the orchestra has begun offering new kinds of concerts that have brought in more first-time attendees between the ages of 25 and 45. Those concerts include performances of movie scores played along with film screenings, and featuring music composed for games, called Video Games Live, which the orchestra plans to present again in its upcoming season.

It also developed a “Strings Attached” series that has featured the orchestra with independent artists, including Calexico, Brandi Carlile and Ben Folds.

“The need to cultivate new and younger audiences is a prominent concern and motivation for the Louisville Orchestra,” Birman said.

That same motivation applies at other arts groups, even if “younger audiences” means people older than 45.

“We have come from an average audience (age) of 60 years to 50 years,” said Bekki Jo Schneider of the Derby Dinner Playhouse. “We are having the best years ever due to baby boomers, but we cater to their tastes.”

Schneider said the for-profit theater is diversifying what it offers by including concerts and children’s theater to capture new customers.

Despite such signs of progress, Brown said arts groups still have a major challenge ahead, especially in meeting the needs of a diverse audience with a different attention span.

“We have a population that has broader tastes in all kinds of art, but especially music,” he said. “We also have a generation of people who’ve listened to music in random order on their iPods.”