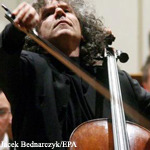 The innovative Stradivari Trust has come up with a clever scheme that combines philanthropy and hard-headed commerce, recognising that culture is a business as well as a recreation , says Simon Heffer.


I was asked the other day to take part in a debate about the case for state funding of the arts. I rather regretted that a diary clash prevented my doing so, because it is one of the few subjects upon which one can have an interesting debate: in other words, it is one of those rare issues upon which I have always found it hard to make up my mind.

I can entirely see the logic of the position that bus drivers and dinner ladies should not be expected to subsidise seats at the opera for people who can already afford to pay £180 a pop for them. However, I also fear for a country whose state turns away from serious culture altogether, thereby contributing to the further dilution of what used to pass for intelligence and sophistication here.

Rather too many “artists” make a living solely or largely because of state funding; although I suspect there may be fewer in two or three years’ time, once public spending is forcibly brought under control. There are composers who write music that almost nobody wishes to listen to, but who get pay days from orchestras who are given Arts Council money precisely to encourage the creation of works that nobody in his or her right mind would willingly pay to listen to.

Admittedly, this was much worse 20 or 30 years ago than it is now: I think of concerts in the 1980s during which I had to sit through the nerve-grinding premiere of some particularly shocking piece of atonal music sandwiched between two rather good works that I genuinely did want to hear. These were works that in many cases, so far as I am aware, still await a second performance, and which will be recorded only when a record company is seeking a tax loss for accountancy purposes. You will know the genre: one of those works that defies the listener to understand why it begins and ends where it does, why it has a middle, and which the late Kathleen Ferrier once memorably described as “three farts and a raspberry, orchestrated”.

A little bit of reality – though arguably not enough – has flitted in since then, especially with the economic downturn of the last couple of years. Concert audiences are shrinking – some auditoria are now so embarrassingly empty that the performances almost seem like a very good rehearsal – and likely cuts in the arts budget mean that certain indulgences will have to end. This has several consequences. First, if orchestras wish to survive, and virtuosi wish to make a decent living, they will have to rely, for a time, more on repertoire that people will pay to hear than on performing works that do a favour only to the composer. Second, and despite the absence of the serious tax incentives that American corporations enjoy when they sponsor opera at the Met, or orchestral concerts at Carnegie Hall, those in the arts world who wish to keep our cultural life going are simply going to have to find more privately funded ways of doing it.

It was in this context that I was struck by the purpose of a charity concert of popular works being given in Cambridge on June 14 by the Stradivari Trust to raise money for research into motor neurone disease. Founded in 2004 by Nigel Brown, the High Sheriff of Cambridgeshire, the trust supports music and literature both locally and nationally. Its most interesting activity, however, is that it seeks to ensure that the country’s most brilliant young string players are able to use an instrument that would normally be far beyond their reach to develop their potential and reputations.

The scheme works like this: the trust secures a fabulous instrument – such as a Stradivarius violin or viola – and invites subscribers to buy shares in it to fund the purchase. It then gives exclusive use of the instrument to a virtuoso who has it for concert performances and recordings. The concert in Cambridge next week is being given by 30 young musicians who have been helped by the Trust to compete in the international concert arena, thanks to being given access to a world-class instrument.

Yet what is particularly appealing about this arrangement is that it is not so much a handout as a business deal. On the anniversary of the arrangement each year, the player is offered the chance to buy his or her own shares in the instrument. The work the Trust does in this respect was for nearly 20 years previously done by Mr Brown’s own Syndicated Instrument Trusts, and supplied instruments to some of the most famous names in British string playing: Nigel Kennedy, Steven Isserlis, Natalie Clein and Jennifer Pike.

The idea is that the more successful the player becomes – the success helped by the quality of the instrument being played – the more shares he or she will be able to afford to buy. Eventually, usually within 10 or 20 years, the instrument becomes his or her own. The shares each year are offered at a price based on the current value of the instrument, so will usually become more expensive. However, this is good for those who have put the money up in the first place. When the shares are finally redeemed by the instrumentalist, the backers get a decent return on their investment.

The Stradivari Trust also acts as a conduit for charitable donations from philanthropists who want to give money to a virtuoso to help them purchase their instrument more quickly; the donations are used to buy shares for them. This sort of combination of philanthropy and hard-headed commerce recognises that culture is a business as well as a recreation. In other parts of the arts world, where the tap of public funding still, for the moment, continues to drip, such perceptions are still rather rare.

The depths of an international financial crisis are hardly the best circumstances in which to try to shift so much of the funding of the arts from state handouts to business and private individuals; but the very existence of that crisis is what may make it necessary. I have always believed that private philanthropy is a more reliable way of ensuring quality, too, than the state is; it cannot be a coincidence that the era of private patrons in music produced people like Bach, Mozart and Wagner, whereas the mixture of art and welfarism has created a generation of mediocrities who will wait centuries for acclaim and still be disappointed.

If the model used by the Stradivari Trust in one dimension of arts funding could be translated elsewhere, and this unfortunate form of welfare dependency reduced, then our cultural life would at least have a future.