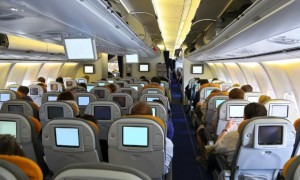 It is no secret that air travel is exhausting and unhealthy, prompting frequent flyers to take refuge in music or film to pass the time when sleeping proves impossible.

Through decades of travel, I have become a connoisseur of inflight entertainment. I remember as if it were yesterday the first piece of music I heard on an airplane. In the summer of 1972 I was on a TWA flight from Chicago to San Francisco. At that time, music was available almost as soon as one sat down. I was handed earphones (most airlines had not yet decided to charge for them) and plugged in as the plane moved from the gate.

As the jet began its thrilling, mad dash down the runway, the music playing was “Outa-Space,” a funky instrumental by Billy Preston. It was the perfect accompaniment as the music heated up while the velocity of the plane increased and it suddenly lifted from the ground and pointed its nose toward the sky.

Of course, the main determinant of which carrier I select is based on safety. All the airlines I prefer have excellent records in that regard. I would not take an airline I do not trust—ever—even if they seated me next to Cecilia Bartoli or Aretha Franklin (two famously fearful flyers) to be my private inflight entertainment.

If safety represents 95 percent of why I choose an airline, it is the other 5 percent that makes me prefer one to the other. This includes issues of cost, schedule (are there nonstops or must I connect?), quality of service, food and inflight entertainment. Like most businesses, every airline tries to establish an identity and a brand that is identifiable and respected. And yet so many of them do such a poor job of setting themselves apart, being special and meriting the loyalty of passengers who have a choice of which airline to fly.

Although I am a world traveler at home in many places, I am also a proud American and it annoys me no end that the image of our country and its taste projected by the major carriers is crassly commercial and militantly mediocre. Delta is clearly the best but that is only because American, United and the others are so dreadful. Delta makes an effort to improve and to offer good service (its flight attendants are excellent), but the corporate mentality in terms of planning menus, beverages (all Coca Cola-owned—including the mineral water—and really unhealthful) and entertainment is only intermittently appealing.

Delta’s entertainment offering, even with recent attempts at improvement, is a very mixed bag. It has just introduced Delta Studio and with it a more sophisticated selection of films and television from America and elsewhere. But Delta’s music channels are not as adventurous and its classical music and opera choices are abysmal. For many years, there were the same two opera recordings (the Solti Walküre and the Mehta Turandot) and now they are gone and nothing has replaced them. “Opera” is mostly recital disks of famous singers doing popular music or non-opera singers such as Andrea Bocelli who don’t even belong there. The classical music choice is seldom refreshed and frequent flyers have little new to appeal to them. If I am stuck in a plane for nine hours, I want something big and consequential for my music, not something “lite.” Doesn’t Delta’s management believe (or want to believe) that their passengers are cultured and discerning?

You might ask why I don’t bring my own music, as many people do, to listen on my own device with better headphones. The answer is that I do not want to carry an extra thing, I don’t want to hear performances I already know, and I am actually interested in observing how different airlines project their identity through the options they have (service, food, entertainment) to shine. In addition, I like inflight audio because I discover recordings and artists I might not have known before.

The Sound of European Airlines

European carriers, especially from countries with important opera and classical music traditions, do a much better job than their American counterparts. Some of them, especially from smaller nations such as the Netherlands and Austria, like to showcase their country’s best. So KLM (which has some of the best programming in the air), will have Dutch musicians such as Eva-Maria Westbroek, Janine Jansen, Elly Ameling, Jaap von Zweden, Bernard Haitink and the Royal Concertgebouw Orchestra. KLM often has musicians as program presenters, including Zubin Mehta and Mariss Jansons.

I find that British Airways, SAS and Finnair do a pretty good job musically, but BA could do better. All of them offer performances of national composers and performers. Virgin Atlantic is excellent for popular music but does not cater well to those of us looking for opera and classical music.

Austrian and Lufthansa do a much better job for these art forms, which should not come as a surprise. Not only are there multiple recordings but often videos of whole operas and concerts. In 2006, for Mozart’s 250th birthday, Austrian had videos of whole operas. Watch a couple of those, have good Austrian wine and suddenly you are in Vienna. This summer on Lufthansa, I was glad to watch a quirky production of Die Entfuhrung aus dem Serail actually performed at Salzburg’s Wolfgang Amadeus Mozart airport.

On Swiss airlines they have some aria albums and a couple of opera recordings, but no video. However, in 2013 there was a 187-minute audio book on the life and work of Giuseppe Verdi that provided me with immense pleasure. Air France often has the most diverse entertainment, with wonderful cinema choices and lots of “world music.” Its classical offerings are good too and the programming is arranged so you can hear entirely French music and performers or opt for ones from other nations. Air France also has the best headphones for coach passengers—most airlines lend business class passengers excellent sound technology but those in economy get to keep the tinny earpieces they distribute or sell. Part of why the music sounds better on Air France for us coach passengers is that the headphones carry sound to both ears without their having to be inserted in the ear canal.

In June 2013 a jet was stuck on the tarmac in Beijing with some special guests on board: The Philadelphia Orchestra. The plane was delayed for two hours, so members of the orchestra played music, including the last movement of a Dvorak string quartet. Now that is what I call in-flight entertainment!