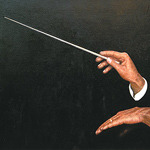 Having someone on the podium in front of 100 musicians does matter. Just ask Leonard Slatkin, Colin Davis, Lionel Bringuier and Vladimir Ashkenazy.


“Any asino can conduct,” the autocratic Italian maestro Arturo Toscanini once said, comparing routine conductors to dunces. “But to make music, eh? Is difficile!” Now, try conducting a major orchestra without a rehearsal, as 23-year-old Lionel Bringuier, the Los Angeles Philharmonic’s associate conductor, did in May. Or consider Leonard Slatkin’s predicament last season when a reputed lack of familiarity with Verdi’s “La Traviata” resulted in an ill-fated performance at the Metropolitan Opera. Now that’s difficult.

In the old days, the conductor was king. He could ridicule musicians in front of their colleagues with impunity. And celebrated music directors such as Fritz Reiner, George Szell and Toscanini often did. No orchestra or opera company could drum these maestros out of the pit. But that’s essentially what happened to Slatkin. When his artistic contribution to the Met’s “Traviata” rubbed the company the wrong way, he was compelled to withdraw from the production, which was a cost-cutting replacement for the work he was originally hired to lead, John Corigliano’s “The Ghosts of Versailles.”

Bringuier faced a different challenge last spring when Gustavo Dudamel pulled a neck muscle during a Los Angeles Philharmonic performance and could not conduct Tchaikovsky’s “Pathetique” Symphony. The associate conductor rushed home during intermission to change clothes, then dashed back to Walt Disney Concert Hall and took the podium, prompting questions from music lovers at a Disney Hall reception held after the concert: What does a conductor actually do? Are subtle musical cues really communicated to an orchestra by a leader’s baton or hands or is it just showmanship? How important is charisma to the conductor’s art?

As it happens, Slatkin, the music director of the Detroit Symphony, is writing a book on the subject titled “Conducting Business.”

“Most of what a conductor does is not done in front of the general public,” he said by phone from Santa Fe, where he was preparing the well-received premiere of Lewis Spratlan’s “Life Is a Dream” for the Santa Fe Opera. “By the time you get to the actual concert, you’ve worked out pretty much what you want to do. It’s really a matter of getting 100 musicians to think like one person.”

According to Colin Davis, whose esteemed career includes directorships of the London Symphony and Royal Opera, many people, including musicians, think that conducting is “too easy.”

“I can assure them it isn’t,” he said. “You can’t hope to get anywhere near it unless you take it seriously from the point of view of technique, musicality and psychology.”

The orchestra that succeeded Toscanini’s NBC Symphony, named the Symphony of the Air, attempted to put on a conductorless season after the maestro’s death. “They tried one or two concerts,” Slatkin said, “and of course it didn’t work, because somebody has to say, ‘This is how it’s going to go.'”

Vladimir Ashkenazy, the distinguished pianist and principal conductor of the Sydney Symphony, said he has directed Beethoven concertos from the keyboard. “After that, it’s too dangerous. It might fall apart. Brahms, Beethoven [his symphonies] or Tchaikovsky would be difficult without a conductor. Rachmaninoff? Forget about it. That’s impossible. So many changes of tempo, rubatos — things like that.”

He describes the conductor’s role as shaping the music in an individual way. “No performance is the same as another one. Sometimes you are inspired to do phrasing this and that way, and the orchestra reacts. I’ve seen great orchestras playing without a conductor the pieces they knew. They played it well, but there was no particular direction. Somehow it was mechanical — without substance, without an interpretation.”

Ashkenazy recalled a Berlin Philharmonic performance of Schubert’s “Unfinished” Symphony at Herbert von Karajan’s memorial service. “Everything was fine,” he said. “But even members of the Berlin Philharmonic said it would have been better with a conductor.”

Davis considers conducting as much a human problem as a musical one. “Conductors must never forget that they are relying on all these wonderful musicians to play the music for them,” Davis said. “If anybody gets in the way, it wrecks the whole show. You’ve got to have somebody to concentrate the forces, and give players confidence to release their own energy and musicality. If a conductor can put his ego aside, then you’ve really got something.”

But what happens when a conductor is given no time to communicate his ideas to an orchestra? Bringuier attended Dudamel’s rehearsals of the Tchaikovsky and had once conducted excerpts from the symphony — important steps toward forming a personal interpretation, but just a beginning.

In his review, Times music critic Mark Swed wrote: “Bringuier played with colors, created sharp contrasts, conducted with tremendous — and convincing — propulsion. He soaked up no more emotion than necessary.”

Yet Bringuier said he wasn’t considering musical issues at the time. “What I was actually thinking about was Gustavo,” he said. “I was very worried for him, hoping he was feeling better, because the big American tour was about to begin. I didn’t know what happened; it happened so quickly. So we just played.”

Slatkin, who has been in similar situations, can sympathize. “It’s different when you inherit someone else’s set of performances that have been rehearsed over the course of a week and even played,” he said. “Then your job is not to disrupt too much. The orchestra’s just trying to remember what it had done over the past few days, and the conductor is there to steer and make sure the ship stays on path. That’s certainly one way to do it.”

But Slatkin also acknowledged that conductors have made memorable debuts by jumping in for people who got sick or missed a plane. “If you have a strong enough personality — and that usually occurs at a somewhat later age — you can walk out there and totally transform a piece,” he said.

“Some of the best concerts I ever did, I had little or no rehearsal,” he added, referring specifically to summer concerts where rehearsal time is usually severely limited.

At the Hollywood Bowl, conductors generally are allowed one three-hour rehearsal. (More time is given for programs at Walt Disney Concert Hall — four rehearsals, totaling about nine to 10 hours.) On Thursday, Bringuier will show what he can do with that three-hour Bowl rehearsal time when he conducts the Los Angeles Philharmonic in Brahms’ massive Symphony No. 1. And the following week, Slatkin returns to the Bowl for two concerts — an all-Shostakovich program, and another with soloist James Galway and the Phil performing works for flute by Mozart, Debussy and Piston.

“Basically, you maybe have time to play through the program,” Slatkin said about conducting at the Bowl. “In some cases, you look at the orchestra and say, ‘Look, you know this and I know this. So watch me here; I know you’re going to be fine there.’ You work out a set of signals that convey to the orchestra what you want at that moment.”

And those signals are usually, but not exclusively, made with a baton or hands. “If you want to show something that’s legato and flowing, sometimes you’ll see conductors put the stick down to take away the angularity,” Slatkin said. “But the conductor is more than just a set of arm gestures. Everything you do can relate to members of the orchestra — you use your eyes, your whole body, any gesture you can, a flick of a finger.”

Slatkin said his modest podium gestures are designed to convey “a sense of feeling and phrase in the music.” Leonard Bernstein’s dramatic antics — he himself called his jumps, leaps and whirls the “Lenny Dance” — are not Slatkin’s way.

The Hungarian violinist Carl Flesch might as well have been thinking of Bernstein when he remarked that conducting is “the only musical activity in which a dash of charlatanism is not only harmless but absolutely necessary.”

But like Slatkin, Bringuier’s podium manner avoids flash; his stick technique focuses on the music. And he’s refreshingly aware of being part of a kinder, gentler generation of conductors.

“That era of Reiner, Szell and Toscanini is finished,” Bringuier said. “Simon Rattle, Esa-Pekka Salonen and Dudamel — all these great maestros have an ability to communicate with musicians. There is nothing dictatorial. It’s about just simply making music.”

Yet one thing many of the old conductors had was charisma. Bringuier told a story about the great conductor Wilhelm Furtwängler, a musician who apparently radiated natural authority.

“Another conductor was on the podium with the Berlin Philharmonic when Furtwängler arrived in the hall, but very quietly,” Bringuier said. “Some musicians saw him and immediately the orchestra started to play better. But he was not conducting. This is what I call charisma.”

For Davis, charisma is only useful at the beginning of a career, because “the public will like the conductor.” But he finds the word “suspect.”

“It seems to me the outward gloss on a personality that makes that personality a celebrity,” he said. “Being a celebrity — the whole idea of celebrity — is against the slow development of the faculties needed to be a great musician. Celebrity is instantaneous, isn’t it? But musicians, they ferment for years.”

And part of that fermentation process naturally involves trying new things. But Slatkin reluctantly admitted there are limits to the conducting business. “Actually, conductors can’t do everything,” he said. “There are composers and styles we don’t do. But everybody should always be open to new and challenging things.

“Since I’m not a young man anymore, I want an interesting challenge. So at the Met it was ‘Traviata.’ I thought I could bring something different to it, look at it from a different perspective than a traditional opera conductor. Most of the time it works, but once in a while it doesn’t.”

Davis agreed. The world of music is simply too vast for a sole musician to fathom. “All you can do is take one piece at a time,” he said. “The wonderful thing about being a conductor is that you never know anything really. You’re always on the verge of your own ignorance.”