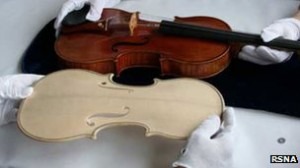 A Stradivarius violin has been “recreated” using an X-ray scanner normally used to detect cancers and injuries, according to researchers.

The US-based group used a computerised axial tomography (CAT) scanner on the 307-year-old instrument to reveal its secrets.

They then used the data recovered to build “nearly exact copies”.

The team said the technique could be used to give musicians access to rare musical equipment.

Their findings have been presented to the Radiological Society of North America at a conference in Chicago.

Radiologist Steven Sirr first had the idea of using a CAT scanner to take images of violins in 1988.

He was an assistant professor at the University of Minnesota at the time and often brought his violin to his office to practise when it was quiet.

One weekend he was called to supervise the scan of a gunshot wound victim.

“I put the violin of the side on a table near the scanner and then after the patient went to surgery I turned round and saw my violin and thought – well it would be interesting to scan that,” Dr Sirr told the BBC.

He had expected to see a wooden shell surrounded by air, but was proved wrong.

“There is a lot of anatomy – I’m used to evaluating anatomy in people and I saw a lot of detail that I had no understanding of, so I took the CT scan to my friend John Waddle, who is a violin maker, and I gave him the images,” he said.

Over the following years the two men scanned many hundreds of instruments, including guitars, mandolins and other violins.

Scans of the older instruments revealed worm holes, small cracks and other damage that helped create their distinctive sounds.

Eventually the two men borrowed a Stradivarius known as “Betts” from the US Library of Congress which still had an original label placed by its Italian creator, Antonio Stradivari, inside its body.

Teaming up with another violin maker, Steve Rossow, they proceeded to create three replicas.

To do this they took more than 1,000 CAT scan images from the original instrument and converted them into a file format used to resemble three-dimensional object in computer-aided design (CAD) software.

“We used the scans to determine the density of the woods that made up the violin – that could only otherwise be done if the violin was dissected and measured – and of course that would never happen,” Dr Sirr said.

The files were then fed into a CNC (computer numerical control) machine. It used the data to carve the violins’ back and front plates, neck and the “scroll” carving at the neck’s end using various woods picked to match the originals as closely as possible.

These were then assembled and varnished by hand.

“The copies are amazingly similar to originals in their sound quality,” said Dr Sirr.

“When we make the violin we copy the changes that have occurred over more than 300 years including the shifts in the wood – the small deformations in the front and back plates that occur over time because of the forces of the strings and the other parts of the violin.”

Dr Sirr said he hoped to repeat the process with other antique instruments and hoped that his work would one day pave the way for students to have access to “nearly exact copies” of the originals.

The dean of the world-famous Juilliard school in New York, welcomed the possibility.

“Every string player graduating from any great conservatory faces an immense crisis of how do you obtain a violin that is at the level that you need to have a really first rate career,” said Ara Guzelimian.

“With the inflation of prices of rare old violins – and obviously Stradivari at the top of that list – it’s far out of the reach of anyone but investors and investment trusts. So if there was a way of putting a superb violin in the hands of a young violinist at a fraction of the cost it would be a huge step forward.”

A well-preserved Stradivarius known as the Lady Blunt was sold in June for $15.9m (£10.2m) at a charity auction. That was more than four times the previous record price for an instrument made by the Italian craftsman.

He said Dr Sirr’s work may have helped democratise the process by making it possible for more people to study such antique violins. But he added that the most highly skilled luthiers would remain in demand.

“This process will streamline that effort to copy an instrument,” said Mr Zygmuntowicz.

“But the very last stretch – the very last 2% – still involves exact judgements about relative thicknesses of the wood, the exact strength of the bracing, the exact varnishes and wood preparations and general optimising of the whole form.