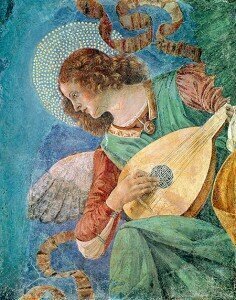 It is not just the Christian musical tradition that has struggled to differentiate between the sacred and the profane.

As a young man, St Augustine of Hippo loved hearing music in church. Even the simplest hymn would give him the keenest pleasure and a psalm could move him to tears of joy. He was so enchanted that he would sometimes forget to pray. For a young Christian, this was rather worrying. Fortunately, God intervened before it was too late. As Augustine recalled in the Confessions, he was freed from the worst of his passion, but was left with a nagging doubt. He knew that music had a valuable role to play in the life of the Church. As he argued in De musica, it could stir faith in men’s hearts much more readily than mere words and was a fitting means of giving thanks to God. Full story.