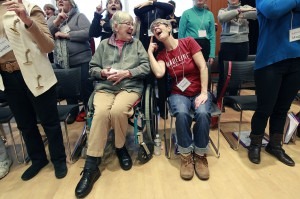 Joanne Hart took cue from her daughter Naomi Hart during rehearsal for the Giving Voice Chorus at the MacPhail Center, Wednesday, February 11, 2015 in Minneapolis, MN. The chorus is open to Alzheimer’s patients and their caregivers.
Credit: Elizabeth Flores

For two hours every Wednesday morning, Tom and Julie Allen feel like a couple again.

That’s when they rehearse with the Giving Voice Chorus, a choir that’s open to Alzheimer’s patients and their caregivers. Except those labels are never used, which is one of the things that makes the mornings so special.

“Once you get the diagnosis [of Alzheimer’s], you’re identified as either the patient or the caregiver. You start to feel less like spouses,” said Tom Allen, who takes a half-day of vacation on Wednesdays so he can attend the rehearsals at the MacPhail Center for Music in downtown Minneapolis. “In this environment, we’re husband and wife. This is one of the few things that we can still do as a couple. … We love this choir.”

The chorus was launched by Mary Lenard, director of the Minnesota Leadership Council on Aging, and Marge Ostroushko, a radio producer whose credits range from “A Prairie Home Companion” to “Speaking of Faith.” They share a longtime friendship, a can-do attitude and an intimate experience with Alzheimer’s: Lenard’s father and Ostroushko’s mother.

For the choir members, the rehearsals offer a musical trip down memory lane, in the songs they sing — a repertoire that runs from “Fly Me to the Moon” to “Happy Trails” — and in the way they feel.

“This gives them a chance to remember who they were before the diagnosis,” Lenard said. “Members of the chorus can do things here that they can’t do anywhere else. They can come here and sing; they can make friends; they can be part of a community.”

Sue Erickson marvels at what being in the chorus has done for her husband, Bruce. “It’s made a real difference in his self-esteem,” she said, noting that his ability to sing offsets the frustration he feels about other things that challenge him. “They gave him a practice CD [of the choir’s songs], and every time we get in the car, he sings with it. He even lobbied for a solo part, and he got it. I’m so proud of him.”

Over the past decade, there has been a growing body of research on the positive effects singing has on people who are battling dementia. (Researchers from the University of Minnesota are studying the chorus in hopes of adding to that data.) People who struggle to remember a family member’s name can recall complicated song lyrics at length.

Once the rehearsal starts, everyone joins in so enthusiastically that a casual observer can’t tell the singers who have memory issues from the caregivers.

“That’s the beauty of it,” Ostroushko said.

According to the Alzheimer’s Foundation of America, music involves “the motor center of the brain that responds directly to auditory rhythmic cues. A person’s ability to engage in music … remains intact late into the disease process.” As a result, music “can spark compelling outcomes,” including facilitating cognitive function and motor movements.

Science aside, the chorus members just know that something special happens, said Karen Sonday, who joined with her sister, Barb Neafus.

“Our first day here, Barb cried,” Sonday said. “She said it was too good to be true. For the next week, the choir was all she talked about. She even carried her [song] book with her all week.”

The chorus is led by Jeanie ­Brindley-Barnett, who is equal parts musical director and cheerleader.

“Follow me and everything is going to be all right,” she promised as the choir prepared to sing “We’ve Only Just Begun.”

At the end of the song, she let out a loud whoop and exclaimed, “Tap somebody on the shoulder and tell them: ‘Good job!’ ”

She was still enthused after the rehearsal. “They teach me more than I teach them,” she said. “They have made me aware of the now. When I start to get frazzled, I slow down and experience the moment.”

Living in the moment is a common practice for people facing Alzheimer’s, Lenard said.

“Some of them don’t remember a lot about the past, and they don’t know what the future holds,” she said. “So they focus on being together in the present.”

No previous musical experience is required. The members who don’t know how to read music get printouts of just the lyrics; the melodies are familiar. Still, some people are a little hesitant at first.

Jerry Semmler was one of them.

“Mary and Marge came to one of my Alzheimer support groups and said they were going to start a chorus,” he said. “It sounded like a good idea, but I didn’t want to come. I’d never been in a choir. But then I thought, maybe I’ll come just to see what’s happening. And once I came, I was hooked.”

For many of the members, the chorus is as much about socializing as music.

“Every Wednesday is a love fest,” Brindley-Barnett said.

Marvin Lofquist relishes the opportunity to lower his social defenses and just be himself. “I feel free to participate when people know my problem,” he said. “I have cognitive ability, but I have trouble remembering things. It’s very freeing for me to participate in a group that understands my limits.”

“Many times, when a person gets a diagnosis, their friends start pulling away,” she said. “They become more isolated. This is a place where they will be accepted for who they are. They can come and enjoy each other’s company.”

And enjoy it, they do.

“The people are so friendly here,” Neafus said as she and her sister prepared to join the rest of the choir for cookies and coffee during a break in the rehearsal. “You can talk to anybody — and we love to talk.”

The chorus was launched in September and has succeeded beyond anything its founders anticipated. It’s up to about 60 members, not counting a half-dozen snow birds who will be returning to the state soon.

“This was an experiment,” Ostroushko said. “We had no idea what to expect.”

Lenard agreed. “We wrote up a one-page statement of intent listing our goals and then ran all over town with pieces of paper,” she said. “We were looking for funding and recruiting members, but we didn’t know how it was going to work out.”

Everything fell into place when the MacPhail Center offered to partner with the chorus as part of its Music for Life program.

“When they embraced us, it changed everything,” Ostroushko said. “It gave us structure, it gave us this beautiful space and it gave us student services, which provides volunteers to come in and help.”

The public response has surprised them, too. The chorus scheduled a concert in December, thinking it would be mostly for family and friends. The auditorium quickly filled. A second show was added, which also played to a full house.

More concerts are scheduled in the spring, including appearances in April and June.

The original plan was to have the chorus take the summer off, but the members are pressuring Lenard and Ostroushko to keep it going.

“Right now we only have enough money to get us through June, so we’ll have to see what we can do about that,” Ostroushko said. “But I understand how people feel. Alzheimer’s doesn’t take a break.”

Lenard said they feel obligated to do everything they can to help.

That emotion is clearly visible. Back at rehearsal, Brindley-Barnett noticed that a newcomer was struggling. She reached out and held the woman’s hand.

“There is no wrong in this room,” she told the woman. “That is our favorite saying.”