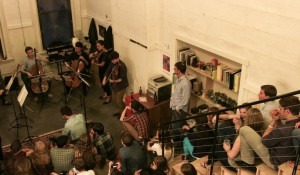 A Groupmuse in action.
Adela Locsin

It’s not uncommon to sell the idea of a new startup based on the model of another (think: “It’s the Uber of pet adoption,” or “It’s like Tinder for baristas”).

Sam Bodkin’s business is no different, even if he’s a bit reluctant to be categorized: “We refer to ourselves as the Airbnb of classical music,” he says.

The comparison isn’t unfair, though. Groupmuse — started in 2012 and run by Bodkin, Ezra Weller and Kyle Nichols-Schmolze — matches Groupmuse users looking to host a concert with willing musicians needing a venue to perform. Once a match is set up, other “Groupmusers” are invited to attend, creating an event that’s part house concert, part party, part social platform.

Where the sharing economy and the arts intersect

It’s a melding of some of Bodkin’s experiences: his travels through Europe using online platform couchsurfing.com to find people willing to host him, and his love of classical music discovered through musicians he befriended in Boston as an undergraduate student.

Combining his interest in classical music and the sharing economy of couch surfing, he came up with Groupmuse.

While the endeavor is inherently artistic, Bodkin isn’t aiming to become a not-for-profit organization.

“We are absolutely a startup, and we fancy ourselves as such. It’s a social startup, built around a web platform,” he says.

There’s certainly a social network aspect to the experience: Members interested in attending a Groupmuse connect through Facebook, sending a message to prospective hosts to introduce themselves before the event. Additionally, musicians who regularly perform have access to guest lists of people who come to their performances and are regular Groupmuse attendees.

Have a problem? Found a startup.

If classical music and startup culture seem like odd bedfellows, to Bodkin, it only makes sense. Fading interest in classical music was a problem he wanted to address, and he sees this kind of entrepreneurial thinking as a solution.

“This is how, basically, people of our generation resolve to deal with these challenges that they see,” he says. “We found companies.”

Groupmuse is currently up and running in three cities (New York, Boston and San Francisco), but there are still some aspects to be worked out as the company grows — for example, musicians are currently paid by donation, whereas ideally Bodkin envisions payment will eventually be built in to the Groupmuse platform.

While in the process of raising venture capital funding, Bodkin says he’s also looking to partner with companies interested in hosting Groupmuse for their employees as part of a new funding structure.

Ultimately, aside from promoting the music itself, Bodkin would like to see it turn into a tool for musicians to manage their careers, building a fan base that is personally invested in their success.

He even has a startup buzzword for it: “Micropatronage.”