Media
The age-old art of musical page turning is under threat from the accursed iPad
May 20th, 2015
Tags: society 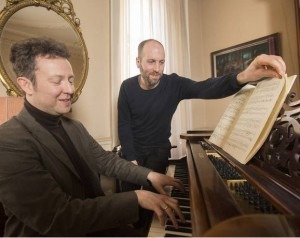 Sam Haywood, a leading British concert pianist, was in dazzling command of a particularly challenging piece when the chair to his left “got too close to the edge of the stage,” he recalls. The unnamed woman, who had been sitting on it with rapt attention, dressed inconspicuously in black, “just… disappeared. One moment she was there and the next she wasn’t”.

The page turner escaped without injury after her classical stage dive, a rare occasion on which a peculiar role in musical performance became the focus of attention. “Unfortunately page turners have to be as unobtrusive as possible, almost as if you forget that they are there,” Haywood says. “It’s a thankless task because often they only get noticed if they screw up.”

Days before he flies to the US to tour alongside Joshua Bell, the American violinist, Haywood has agreed to demonstrate a simple, yet vital, skill that is as old as pianos and paper. Great page turners can enliven a performance, he says, by exuding an infectious energy, but thanks partly to his early adoption of new technology, their days may also be numbered.

Haywood sits at a 19th century Steinway in a grand house on Wimpole Street in central London. It was formerly home to Queen Victoria’s doctor, Sir Thomas Barlow, and remains in the family. Sam lives in the basement with his wife, Sophia, but likes to climb the curved staircase to practise here, with the blessing of his music-loving landlady.

“Turners always sit on the left,” he says, opening a Chopin score to the composer’s “Scherzo No. 2”. “And I always ask them to turn from the top corner of the page.” Following Haywood’s advice, I sit, back straight but angled slightly away from the piano, my hands resting neatly in my lap. (“Alert stillness is best”, he says). Retrieving every memory of minims and rests from my failed assault on grade four piano 20-odd years ago, I try to follow the music as Haywood plays.

The proximity is thrilling, and a privilege; as the pianist’s hands leap towards the low notes, I feel the wind that they whip up. But then comes a rest that Chopin did not intend, as I get lost in the crucial last stave. My pulse rising slightly, I rise to my feet, reach with my left hand and flip the page with thumb and forefinger. I nail the turn itself but I’m about a half-second too late. Disaster.

“I find page turning much scarier than actually playing,” a sympathetic Haywood says. He is humouring me, and doesn’t need a turner at all, having memorised all 79 pages (roughly 35 minutes) of this score years ago. Concert pianists never read in big solo performances, and Haywood says memorising is always best because it frees the head and eyes to become part of the music (“I like to look through the lid and imagine the notes are flying off into the hall”). To make it easier, Haywood has invented Memory Stars, a trio of transparent sheets that use stars to block out progressively more of the page as the musician learns. He says he can now memorise 80 pages in a fortnight rather than a month.

But lending a maestro a third hand will always be vital for lots of chamber and new music, just as it is for many other instrumentalists (witness the dramatic page turning scenes in the drumming psychodrama Whiplash). A skill rather than an art, it has not changed for centuries, and tends to be undertaken by ushers at concert halls, many of them aspiring musicians. But about five years ago, Haywood caused a stir with a new approach. He reaches for an iPad and rests it against the stand. An app displays the same, scanned page of Chopin’s “Scherzi”, but I am now truly redundant as Haywood flicks his left foot on to a Bluetooth pedal to turn his own pages, wirelessly and silently.

At first, many concertgoers and reviewers were more interested in the device than the music, but now tablets are used more widely. Several similar set-ups have emerged, meanwhile, including apps that will listen to the music, turning pages automatically (the best time to turn, Haywood says, is a few notes short of the end of the page).

What does it mean for human page turners? Are they under threat? “I think maybe they are,” says Haywood, who says the ultimate solution would be a score that could be projected in front of his eyes, using a Google Glass-like device. “But maybe there’ll be general relief… I’m not sure that there are many enthusiastic page turners.”

Kate Telfer is an exception. The young mezzo soprano is a backstage usher at Wigmore Hall, one of London’s best-known concert halls. She and her colleagues have a range of duties, including page turning. “It’s an incredible opportunity for us to be able to sit on stage and be part of the performance process,” she says by phone. In her first season, she has turned pages for Alexander Melnikov, among other leading pianists, but has yet to encounter Haywood or any iPads. The 24-year-old feels safe in her job – for now.

Haywood remembers a similar keenness among students in America, whose faces occasionally fall when he reveals his iPad. “Sometimes I don’t have the heart to use it,” he says. He accepts that there are risks and disadvantages to digital reading, too. Few tablets are as large as sheet paper, so can be hard on the eyes, and there are stories of alerts and alarms popping up over the virtual page. “You have to turn wifi off, kill all the other apps, and be sure the battery’s full,” he says.

There has been no record, so far, of an iPad falling off the stage, however, and Haywood says you could fill a book with tales of page turning gone bad. (“It would be a real page turner,” he offers apologetically). “I had one friend who was turning pages who is quite well endowed,” he recalls. “She was wearing a long, dangly necklace and when the pianist came down to this end, and she stood up ready to turn the page, his left hand got entangled in her necklace. He then had to leap to the other end and took her with him.”