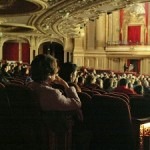 From time to time, people have mentioned in comments here a French government study that supposedly shows that the French classical music audience is very young, with a median age of 38. I’ve never been able to find the source for this number. From some of what’s been said, I get the idea that it’s on a flyer handed out at concerts.

But the French Ministry of Culture tells a different story. You can go here to see the results of their 2008 study of French concert attendance, made available as a PDF file. Or go here if you’d like the numbers in an Excel spreadsheet. (Or here for an overview page, from which you can find out more about the study.)

The numbers are expressed in absolute terms — the number of people (in hundreds) in various age groups who attended classical concerts in the year the survey covered. And they’re broken down by age groups.

From that, it’s easy to find what percentage of the French classical music audience falls into the age groups the study specifies:

So this median age of 38 seems to be a myth. If we believe the French Ministry of Culture (which has been conducting these surveys for years), fully one-quarter of the French classical music audience is 65 or above. And exactly half of it — 50% — is 55 or older.

That means its median age is something around 55. (Since the median would be the point at which half the population in the study is older, and half is younger.)

This should advance the discussion that’s erupted here in comments from time to time, about the age of the classical music audience in Europe. Some people think it’s lower than it is in the US. But not in France, apparently.

Can anyone point me toward figures for other countries?

(Many thanks to Claudine Verdier- Dievochka for the links to these numbers. Here‘s her website.)