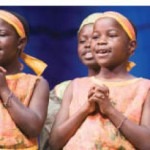 Music has long been used to benefit causes and the African Children’s Choir (ACC) concert in Campbell River July 9 will support a cause that’s as worthwhile as it gets.


“Just tell the people that they can come and see what hope looks like in children who have known hopelessness all their lives,” said Tony Were, a conductor with the choir which will perform a free concert at the Ocean Crest Community Church on Friday, July 9 at 7 a.m.

The African Children’s Choir (ACC) is made up of children from the poorest countries of the world whose voices have been heard by world leaders and the top performers of the entertainment world and, over the past 25 years, have raised millions of dollars to educate and rebuild countries devastated by famine, war and AIDS.

As a young person in 1991, Were saw the opportunity open for himself, his family and his village when he was selected to join the choir.  In the years that followed, he was able to travel the world, raising awareness and funds to educate thousands of other children born into unimaginable circumstances.

Today, with the support of Music for Life, the sponsors of the African Children’s Choir, Were  is a broadcast journalist.

Were first encountered the choir in 1990 in Kenya. His single mother had heard about the choir from a missionary and took Tony to a meeting/audition.

“When they heard my mom’s story, they asked me to sing,” Were said.

After singing one song, “They told me I was in the choir,” he said. It was just one song and he was in. The choir emphasizes the need of the family as much or more than the musical ability and Were’s family qualified.

Children selected to tour will spend approximately five months at the Choir Training Academy in Kampala, Uganda. There the children learn the songs and dances, attend school, play and attend Sunday School at a local church. They then tour with the choir internationally.

Through the performances they have raised substantial sums of money. This supports ongoing care and education of the choir children themselves and funds the education and welfare of many thousands of other children in some of Africa’s most troubled and needy areas.

Were did three concert tours before “retiring” to begin his education. He was put through high school and college and become a broadcast journalist. Other friends and colleagues from the choir have become doctors, lawyers and other professionals.

These children have been lifted out of impoverished situations and have been whisked away to developed countries with riches and experiences unimaginable back in their home communities.

The intent is to broaden their horizon and expose them to what is out there in the world. Then, when they go back to Africa and begin their education, they are expected to use that education to improve the quality of life of their communities.

The African Children’s Choir believes that in order to change Africa, they need to change it’s children, by providing them with the opportunities they need to succeed.

People attending the choir’s July 9 concert can expect to hear a mix of traditional African and English songs and some African cultural dances.