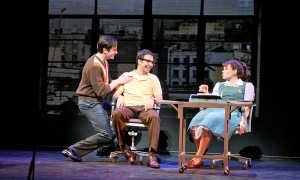 Colin Donnell, left, Lin-Manuel Miranda and Celia Keenan-Bolger in “Merrily We Roll Along” at Encores!
Ari Mintz for The New York Times

BROADWAY audiences have spoken. “The Gershwins’ Porgy and Bess” is a big hit at the Richard Rodgers Theater, where it opened in January. The run has been extended through September.

But since it was first presented at the American Repertory Theater in Cambridge, Mass., last fall, this heavily revamped version of the opera “Porgy and Bess” has provoked outrage from a minority of Gershwin lovers who assert that the creative team, headed by the director Diane Paulus and the playwright Suzan-Lori Parks, crossed a line. This tailored-to-Broadway “Porgy,” detractors say, is no reimagined adaptation but a desecration of a great American opera.

Contrast this stinging criticism with the reception of the director Peter Brook’s adaptation of Mozart’s “Magic Flute,” presented by the Lincoln Center Festival last summer. Mr. Brook pared Mozart’s opera down to a streamlined 100-minute version, performed by just seven singers, two actors and an onstage pianist. Whole plot threads and characters were removed. The vocal lines were sung in the original German, and the dialogue spoken in French. (The production originated in Paris.) The pianist even folded bits of other Mozart works into the score.

Mr. Brook called his production “A Magic Flute” not “The Magic Flute,” to emphasize that this was his take on a beloved opera (and perhaps to fend off accusations of directorial distortion). I loved it for the innocence and simplicity that came through, and if there were complaints that it violated Mozart, I did not hear them. That was simply not an issue.

Why do some elaborate revisions draw so much fire but not others? The disparate reactions to these two productions suggest a lack of ground rules when familiar operas and, for that matter, musicals and plays are revived in adapted or reconceived versions. Works still under copyright protection allow limited tinkering and are protected (or not) by the estates of the creators. (That the Gershwin estate gave the O.K. for the revamped “Porgy” is a sore point for those who love the opera.) Older works, though, are fair game, but shouldn’t artistic principles and respect for the creator’s intent factor in?

To explore the parameters for adapting and revising existing works I talked to Stephen Sondheim, an outspoken critic of “The Gershwins’ Porgy and Bess.” Before the production was introduced in Cambridge, Mr. Sondheim wrote a letter published in The New York Times. His critique was leveled not at the show, which he had not seen, but at comments by Ms. Paulus, Ms. Parks and some cast members, quoted in an article in The Times, which described the opera as badly in need of a dramatic overhaul to reach today’s audiences. Mr. Sondheim strongly defended the original “Porgy and Bess,” particularly the contributions of DuBose Heyward, who wrote the libretto and, with Ira Gershwin, the lyrics.

Mr. Sondheim has been party to some bold reimaginings of his own works. In recent seasons Broadway audiences have seen the director John Doyle’s powerful, experimental and intimate productions of “Sweeney Todd” and “Company.” Jonathan Tunick’s orchestrations, which for many Sondheim devotees are crucial to the sound of the musicals, were dispensed with. Instead the actors, playing instruments, doubled as mini-orchestras. What if this radical concept had come up at some future time, when Mr. Sondheim was no longer around? Actors playing instruments? Enraged Sondheim lovers would probably picket the theater.

All types of directorial concepts are possible “as long as they honor the notes,” Mr. Sondheim said in the interview. Mr. Doyle’s “Sweeney Todd” and “Company” were both faithful to the original notes, lyrics and book, though small cuts were made in “Sweeney,” with Mr. Sondheim’s permission. So the most obvious ground rule is that when a work’s creators are still around, what they say goes.

Would it be acceptable for a production to cut “The Ballad of Sweeney Todd” and the recurring choruses that narrate and comment on the story? “No, no, no,” Mr. Sondheim said. But, he added, if a director were to call and say, “We want to do it with all dwarfs,” sure.

Then again the chorus is cut entirely in Tim Burton’s film version of “Sweeney Todd.” Mr. Sondheim gave his blessing because film has its own ground rules.

But “Porgy and Bess” is a work in need of special protection. Rattled by reactions to the tryout of his long opera in Boston, Gershwin was persuaded to make sizable cuts before the 1935 premiere in New York. He died in 1937, at 38. Four years later a Broadway version stripped of recitative, with spoken dialogue linking songs and ensembles, had commercial success. But not until the revelatory 1976 production of the complete work at the Houston Grand Opera did it get its due.

Mr. Sondheim said if he had been around when “Porgy” was new, he would have advised the Gershwins and Heyward to “do what you want to do, and then that will be the official version — and tell your publisher not to release the first version to anyone.” If Gershwin had wanted two versions, one for the opera house, another for musical theater, that would have been fine, Mr. Sondheim added.

But today, if composers and writers want their works presented in the versions they deem best, they had better do something about it. Mr. Sondheim has designated in his will what he called a phalanx of composers, writers and associates to protect his works.

The debate over “Porgy and Bess” on Broadway brings up another ground rule for revivals and adaptations: the more familiar the piece, the more freedom a production team wants to claim in revising it. You can play around with “The Magic Flute” because it’s so well known. “Porgy and Bess,” though, presents special problems in this regard. The songs are imprinted in the public memory, but the opera in its original form is not well known.

As Gershwin made clear in an article he wrote for The Times in 1935, when “Porgy and Bess” was on Broadway, he had worked hard to create an orchestral and choral entity, a true opera with recitative and arioso, and a narrative arc determined by the shape and flow of the music. Those familiar songs are meant to be heard in context, emerging naturally from the continuous score.

The question of revisions applies more to opera than to musicals, Mr. Sondheim said, since only classic musicals tend to be revived and no one wants to tamper with success. Flops that could use some revamping tend to languish, he added.

He was gratified, he said, by the enthusiastic audience response to the recent Encores! production of “Merrily We Roll Along,” a flop at its 1981 Broadway premiere. Encores! presented it in a heavily revised version that essentially came out of a La Jolla Playhouse production from 1985. “Merrily” may be my desert-island Sondheim score, and I slightly prefer the original version. But the revision is the only score being licensed today.

In the world of opera, when a director takes a radical approach to a repertory work, the changes and tweaks, however outrageous, are usually confined to the stage. Music and text are almost always honored, though various cuts, sometimes including whole arias, have become standard with many staples.

Most classic operas have no real legal protection. There was nothing to stop Mr. Brook from tampering with Mozart’s score. Still, if music and words are respected in most productions today, the reason is not just a principled devotion to the masters but also something more pragmatic.

The orchestral and vocal parts are set, published and widely available. Musicians know how to play them; singers know how to sing them. Reorchestrating Mozart or Verdi would be complex and expensive. But stagings start from scratch, whether slavishly traditional or radically modern in concept. A company has to build sets and make costumes anyway, so if a house wants to be hip, directors are given leeway to shake things up.

Sometimes a production is so concept driven that though the music is performed as written, its character and intent are altered. Take Willy Decker’s staging of Verdi’s “Traviata,” which opened at the Metropolitan Opera last season and returns on April 6, starring Natalie Dessay as the courtesan Violetta. This surreal modern-dress production plays the entire story within the confines of a tall, curved whitish wall that suggests an arena under clinically bright lights.

Mr. Decker certainly puts his slant on the music. In Verdi’s conception Alfredo, Violetta’s smitten lover, pours out his contentment in the aria “De’ miei bollenti spiriti” alone onstage at the opening of Act II. In the Decker staging last season the tenor Matthew Polenzani, as Alfredo, was not alone but romping on a couch with Violetta (Marina Poplavskaya). When Alfredo quoted his beloved’s avowal of love to him, Violetta mouthed along with the words, mocking the moment with melodramatic arm gestures. An aria meant as a character’s confession of love in a solitary moment became a couple’s romantic game of hide and seek. Whatever you may think of this idea, you hear the music differently.

Many opera directors are eager to take the next step and fiddle with words and music. At the 2013 Bayreuth Festival in Germany the Wagner bicentenary will be celebrated with a new production of the “Ring” cycle. The director, Frank Castorf, recently divulged his ideas for his radical staging in an interview in Berlin. His “Ring” will center on the race for oil, the “gold rush of our time,” he said, and will pivot from Russia to Texas during the oil boom of the 1950s.

Mr. Castorf is known for anarchic interpretations and likes to fold texts from other works into the theater pieces he directs. He wanted to cut and alter the “Ring” libretto and, as he put it, “edit Wagner together with something else,” a concept that was quashed by the conductor of the production, Kirill Petrenko, with the support of the two Wagners (half sisters and great-granddaughters of the composer) who direct the festival. One of them, Katharina Wagner, in her work as a stage director, has done wild productions, including a stupefying “Meistersinger” at Bayreuth. But even for her, tampering with her great-grandfather’s words and music is going too far.

In time every opera will be fair game, of course, just as Shakespeare’s plays have long been not just reconceived but rewritten. Ultimately, perhaps, these ground rules are just subjective calls in a living art form. Though Mr. Sondheim is a stalwart defender of a creator’s original intent, he admits to being a very impatient operagoer. “I love Puccini,” he said, “but I would cut some of it.”

This article has been revised to reflect the following correction:

An article on March 11 about the challenges involved in revising well-known operas and musicals referred incorrectly to the composer and lyricist Stephen Sondheim’s position on what kinds of changes he would permit to his own works. He responded “No, no, no” when asked if it would be acceptable — not unacceptable — to cut a ballad and the choruses from his musical “Sweeney Todd.”