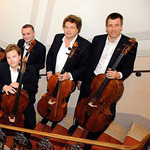 Love the cello? Imagine what it’s like when a dozen come together to make sweet music.


It’s known as the “orchestra within an orchestra”.

The virtuosic ensemble The 12 Cellists of the Berlin Philharmonic Orchestra is creating a buzz among Australian classical-music fans with news it will perform its own breakout concert when the entire orchestra travels to Sydney in November as part of the World Orchestras Program. It will be the first chance for Australians to hear the famed cello ensemble in action.

The musicians will take to the stage of the Opera House Concert Hall at 2pm on November 20 to play music from movies, tangos, classical favourites – and Australian composer Brett Dean’s 12 Angry Men. The program includes Blacher’s Blues, Espagnola and Rumba Philharmonica, Faure’s Pavane, Morricone’s The Man with the Harmonica, Kaiser-Lindemann’s The 12 in Bossa Nova and Piazzolla’s Milonga del Angel and Fuga y Misterio.

The ensemble’s fame is such that music lovers the world over simply call them the “12 Cellists”. Its fame dates back to 1972, when the Berlin Philharmonic Orchestra’s cello section performed a radio broadcast of Julius Klengel’s Hymnus for Twelve Cellos.

Klengel, a cello virtuoso and teacher, composed the piece in 1920 for a dozen cellos. It’s said that, together with 11 of his most talented students, he presented the piece to his friend Arthur Nikisch, principal conductor of the Berlin Philharmonic Orchestra from 1895 to 1922, as a serenade for Nikisch’s 65th birthday.

In Dean’s work 12 Angry Men, the cellists debate, argue and cajole each other until a lone voice leads them to consensus. The piece is inspired by the play and the movie of the same name about a jury in conflict, where the personalities of the jurors bump against another. The image of individuals within a supposedly harmonious group has a cheeky relevance for a piece written for the famed cellists of the BPO: these are virtuoso musicians who must, for the most part, sound as one. Dean should know – he was a member of the BPO’s viola section for many years and observed the cellists at close range.

The full orchestra is performing a program of Haydn, Berg and Brahms at the Opera House on November 16 and 19, and Rachmaninov and Mahler on November 17 and 20, under the baton of chief conductor Sir Simon Rattle. The 12 Cellists perform on the afternoon of November 20 before returning to the Concert Hall stage in the evening.