Media
According The Accordion Its Historical Due
December 30th, 2020
Tags: instruments 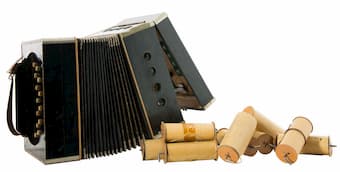 Throughout the Classical and Romantic periods, the humble accordion and its simpler cousin, the concertina, were important parlor, chamber, and accompanying instruments. The earliest forms of the accordion were inspired by the 1777 introduction of the Chinese free-reed sheng (bowl mouth organ) into Europe by Père Amiot, a Jesuit missionary in Qing China. Amiot entertained Beijing listeners by playing harpsichord versions of Rameau’s music, including Les sauvages (later part of Les Indes galantes). His introduction of the sheng set off an era of experimentation in free-reed instruments such as Anton Haeckel’s Physharmonika, a bellows-operated reed organ (Vienna, patented 1818), and Friedrich Buschmann’s mouthblown “Handäoline” (Berlin, patented 1822). Two of Haeckel’s instruments from 1825 can be seen in the Vienna Technical Museum. The Germanisches Nationalmuseum in Nuremberg holds Europe’s largest collection of early German free-reed instruments, accordions, and harmonicas.

The accordion’s name, from the German word Akkord (chord), first appears in an 1829 Viennese patent by the Armenian inventor Cyrillus Demian (1772-1849). Demian’s description emphasized the “new” aspect of playing whole chords on one side of the instrument (one or two keys in early models) in contrast to concertina construction (with melody buttons on each side of the bellows, and no chordal keys). The National Music Museum in Vermillion, SD, has a large collection of accordions by Hohner and notable 19th-century German makers: Its one-of-a-kind diatonic button accordion by the Berlin maker J. Pomm is a custom experimental model built for Constantin Wettering, who worked as a professional musician in New York City and Chicago in the late 1850s. It plays in eight keys, with 70 treble key levers and buttons for the right hand. Full story.