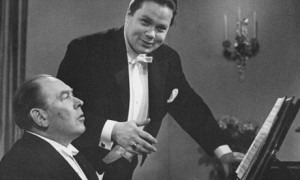 They get little credit and less pay than the singers they support. So why do accompanists do it?

Pity the poor accompanist, condemned to sit in the shadow of the great voices and the even greater egos of today’s singers. Being the pianist who plays for them can feel like the most thankless job in music. The singers couldn’t do it without them, but it’s the braying sopranos and the yodelling tenors who get all the glory, as well as most of the cash and applause – despite the fact that all they’ve done is sing a few tunes, usually in a foreign language, while the pianists slog their guts out playing fiendishly difficult accompaniments by Schubert, Schumann or Britten.

It’s a life that Roger Vignoles, the veteran British accompanist who has worked with everyone from Kiri Te Kanawa to Anne Sofie Von Otter, laments in his hilarious song The Battle Hymn of the Accompanist. “I only make believe I’m following their Lieder,” he sings. “That’s what I’m staying for/ That’s what I’m playing for/ Art is calling for – me!” And later: “You may think this job sucks/ When they get all the bucks/ Forget their lines, transpose/ And jump from page to page!”

After four decades at the top of his profession, however, Vignoles is finally getting to call the shots, having curated a series of eight concerts at the Wigmore Hall in London. Billed as a showcase of song that will celebrate the relationship between pianist and singer, the series features such sopranos as Joan Rodgers and Sandrine Piau. Vignoles will still be on the piano, of course, but for once it’s his baby, his name in lights. How would he sum up his craft? “I sometimes describe it as the art of getting what you want without the other person noticing.”

The archetypal British accompanist was Gerald Moore, who lamented his plight just as passionately as Vignoles, despite the fact that he was assisting the likes of Elizabeth Schwarzkopf. “We accompanists,” Moore said in his 1960s recording The Unashamed Accompanist, “have our minds above such mundane things as fees. But I would like people to realise what extremely important people we accompanists are. The most enchanting lady walks on to sing, and all the ladies look at her because of what she’s wearing, and all the men look at her because – well, all the men look at her. And nobody looks at me. And I can’t blame them. Nobody notices the accompanist at all. He looks so slender and shy and so modest that people think he’s there just to do what he’s told, to follow the singer through thick and thin. Well, there’s a great deal more to it than that.”

You would have thought that, by now, musical culture would have twigged that there’s more to a song recital than the singer. But is anyone really listening to what these toiling accompanists are doing? As pianist Anna Tilbrook – who plays for, among others, tenor James Gilchrist – puts it: “These songs would sound pretty strange without the piano.”

Iain Burnside, another seasoned accompanist, agrees. “I always think of what my mentor, Eric Sams, said – that the whole song repertoire is a piano art form rather than a singer’s. After all, the great Lieder and song composers were pianists.” This is a good point: think of Schubert, Schumann, Brahms, Wolf, Fauré and Debussy. “Hardly any of them sang,” says Burnside. “Once you’ve got that idea in your brain, it’s hard to be comfortable with the idea that what you’re doing is merely ‘accompanying’.” And in Lieder, of course, it’s the pianist who leads.

“I hate the term accompanist,” continues Burnside. “You can’t deny there are connotations that it’s a secondary entity. But unfortunately I can’t think of a better one. If you insist on being called a pianist then people think that you’re comparing yourself to Sviatoslav Richter. That’s not what it’s about: you’re just asking to be taken seriously in your own right.”

It’s not just in the fees that Burnside sees inequality, but in the promotion, the fact that the singer – or instrumental soloist – has their name in lights, while the pianist’s name appears as an afterthought on the CD cover, poster or review. “When a ‘proper’ pianist like András Schiff or Mitsuko Uchida plays for a singer, they will get half the review, whereas when I’m playing the same repertoire – or Roger, or any of us – we’ll get one adjective, usually ‘sensitive’, and that’s it.” The irony is that the colour, range and collaborative alchemy that a skilled accompanist will deliver is precisely what a professional soloist, be it Schiff or Uchida, would struggle to create.

Tilbrook knows what it’s like to be regarded as the backdrop. “There are singers you build up a rapport with,” she says. “But you also get a soprano who says you’ve got to wear a more understated dress than hers so you don’t upstage her. Maybe that’s why there are hardly any female accompanists.”

While Vignoles embraces life as an accompanist, he is determined for it to be seen as an art form in its own right. That means celebrating the things accompanists can do that no other musicians can. He talks of the piano as a reservoir of colour that needs to create the infinite emotional variety required in everything from Schubert to Debussy,Dvořák Dvorˇák to Copland. But it’s more subtle even than that. “Every voice you play for requires a different background,” he says. “Every person you work with is giving you something different all the time. My playing has become much more interesting because of that, because of all the people I’ve had to work my playing against. The most exciting thing is when something new happens in a concert, when you say to each other afterwards, ‘We’ve never done it like that before, but it was right for that moment.'”

More than anything else, what unifies these accompanists, in their passionate but egoless profession, is the thrill of doing justice to magnificent music. “There’s no getting away from the fact that the greatest songs ever written are in a foreign language,” says Vignoles. “But what they are all really about is universal human experiences. That’s the most important thing we do: project natural human feelings in a way that transcends time and place.”

Vignoles talks of a virtual telepathy, moments when he knows what the singer is going to do before they do, invisible connections that bind his fingers and their voice. As Burnside says, “You build up a kind of musical radar. You become attuned to a singer’s breathing, you get a sense of what their breath span is, and when they’re likely to be heading for trouble. It’s quite a private, sensual thing, listening to someone’s breath that intently.”

Tilbrook says there are times when she has saved singers from embarrassment. “The real art is to have that sixth sense, knowing when they are going to have a memory lapse, when they’re going to come in a bar early or even skip a whole verse. You have to be able to cover all that in your playing, so smoothly that no one notices.”

Doesn’t that mean Tilbrook is allowing these singers to get away with murder – and getting none of the credit for her skilled coverups? “Yes! But I love to be able to do that. It’s great when you think no one would have known there was a mistake. You have to be totally on your mettle, totally in the moment – and totally aware of the person you’re accompanying.”