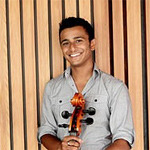 YouTube brings together musicians from around the world for an online symphonic masterpiece.


After uploading winning performances, an entire cyber-orchestra will meet in the very real surrounds of the Concert Hall.

More than a few nerves will be jangling when YouTube brings 101 musicians from all over the world to the Sydney Opera House in March.

After auditioning and being judged online, then rehearsing and communicating online, for some of the musicians, just leaving cyberspace for the Concert Hall in Sydney will mark the first time they’ve travelled outside their home countries.

Advertisement: Story continues below
For four of the selected musicians, the pressure will be even higher – they’re the ones who scored a coveted soloist spot at the March 20 multimedia extravaganza, which audiences can catch in person at the Concert Hall or online. The gala performance includes not only performances of Britten’s Young Person’s Guide to the Orchestra, Stravinsky’s Firebird and Mothership, a special commission from American composer Mason Bates, but vast images projected onto the interior and sails of the Opera House.

Canberran John Burgess is one of the lucky soloists. He auditioned on a custom-made electric double bass then sent his video to the judging panel. The Sydney Symphony was one of nine orchestras from around the world, including London Symphony Orchestra and the Berliner Philharmoniker, which helped judge the musicians.

His fellow soloists are a Brazilian electric guitarist, an American violinist and a Chinese player of the guzheng – a traditional plucked instrument invented about 91BC.

The international music experts liked more than 300 finalists from 46 countries; the YouTube user community then had their say during a week of online voting in December. San Francisco Symphony music director and London Symphony Orchestra principal guest conductor, Michael Tilson Thomas, took the online votes into consideration when selecting the orchestra he will conduct in Sydney.

Panagoda told The Sydney Morning Herald: “It felt a little bit weird filming myself playing and then uploading it to the internet for everyone to see, for all the other cellists out there to see. It was a bit daunting and a bit embarrassing.”

Miller, meanwhile, is delighted to have the chance to show off his instrument in such grand surrounds. “There are limited opportunities for me to play the timpani and this experience will realise my lifelong dream to perform in one of the world’s most iconic concert halls,” he says.

The orchestra’s 101 members and soloists range from 14 to 49 years old and include amateur and professional musicians, students and teachers. They will take part in a week-long classical music summit with Tilson Thomas and other performers, culminating in the concert. YouTube is donating all box-office proceeds to the Opera House’s digital education initiatives.