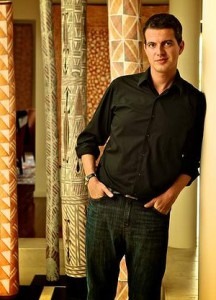 Philippe Jaroussky has long been fascinated by the lives of the castrati.
Photo: Marco Del Grande

The phrase ”to suffer for one’s art” is a bit of a cliche nowadays, but go back 300 years and there would be many a young boy who could tell you in gruesome, graphic detail exactly what it meant.

In a nutshell, those with promising voices could find themselves being led to a backstreet barber, drugged with opium, put in a hot bath and gelded. The result – for the lucky few – would be a career similar to that of today’s rock stars. They would tour the major opera houses of Europe, commanding huge fees for their strange, high-pitched voices pushed to Barry Gibb extremities. These were the true divas of the day, famous for their tantrums, emotional outbursts and outrageous demands, with an adoring audience of females who loved to shower them with gifts and no doubt tell them they were fabulous.

The career of Philippe Jaroussky has many parallels with the castrati: he, too, is chauffeured to concert halls all over the world, audiences swoon at his heavenly, crystalline voice and boyish good looks, and fans (especially middle-aged women) lavish him with presents, particularly chocolate and knitted scarves, to keep those famous pipes warm. It is, he acknowledges, ”a job for narcissists”. But thankfully, that’s where the comparisons end. The French countertenor’s voice is an entirely natural construction; no suffering was required.

”I don’t believe you have to suffer a lot in life to have the best artistry,” he says in surprisingly deep, heavily accented tones, while at the same time acknowledging that the sheer horror of castration gave an edge to performance that can never be re-created. ”They wear their drama in their voice. The tragedy was that they couldn’t totally be men and that’s there in the voice.”

Jaroussky has had a long-time fascination with the neutered singing sensations of 18th-century Europe. A few years ago, he recorded La Dolce Fiamma, a collection of forgotten arias for castrato voice written by J.C. Bach; next month he will join the Australian Brandenburg Orchestra in a concert that showcases a series of baroque opera show-stoppers made famous by the two great rival castrati, Farinelli and Carestini.

Picture the scene: London in the age of powdered wigs, and well-known composer Handel and his less-famous rival, Porpora, are duelling for supremacy in the opera stakes. In Handel’s camp is the famous castrato, Carestini, while Porpora has the ear of the equally adored Farinelli. Both composers wrote music to show off their star’s incredible talents, each determined to make their arias more sublime, more spectacular, more virtuosic every time.

Apart from their stratospheric voices, the castrati were famous for their off-scene dalliances with women and men. Ironically, the very act that robbed them of their masculinity turned them into superhumans; deprived of the necessary hormones, their limbs grew unusually long and their chest cavities huge, while their voice boxes remained childlike. The resulting sound was an eerie mix of power and innocence; a supreme human voice created from a terrible inhumanity.

As well as the legion of knitters, Jaroussky, the poster boy of countertenors, has a huge gay following. ”A lot of gay people are interested in this voice because it shows them a different way to be a man, less of a caricature, but I wouldn’t say this is specific to a countertenor voice. Sometimes we mix up being a countertenor with being gay, but it’s a lot more complex than that. Some are gay and some are straight.

Jaroussky, who grew up in the suburbs of Paris, began as a violinist but was never totally happy playing the instrument. When he was a teenager, he heard Martinique-born countertenor Fabrice di Falco sing at a baroque concert at a church in the city. He was shocked and fascinated by the sound, but despite his initial ambivalence, a small voice in his head was saying, ”You can do this, too”.

His first music teacher was unsure. ”She said, ‘You are a good musician but you have a small voice’, but I said, ‘Trust me. I am sure I can become a countertenor.”’

So what is the appeal? ”I think it’s a way to stay like a big boy,” he says. ”I am 35 years old now but I still think I’m a teenager. A lot of people think a countertenor is trying to sing like a woman but for me it is more like trying to find something from my voice from when I was a child, something pure.”

The last of the castrati, Alessandro Moreschi, died in 1922, leaving the only sound recording of a voice that one modern critic described as ”Pavarotti on helium”. But our fascination lingers; the androgyny and sexual ambiguity are only part of the appeal. The tragedy of poverty and the desperation of parents prepared to mutilate their children as a way of escape seems unfathomable. It’s a cruelty that continues to intrigue Jaroussky. ”Being a countertenor is a way to understand the colour of the castrato, but we can neverx truly resume their part.”