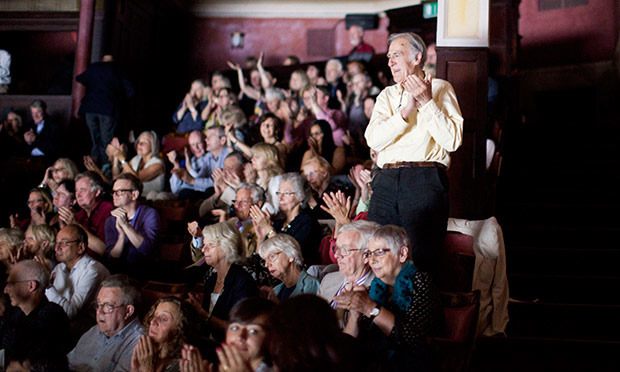 This year’s Edinburgh international festival audience turned out to be a noisy lot. Photograph: Stuart Armitt/EIF

Who says classical music must be enjoyed in silence? Despite a summer of mobiles, coughs and even a misfiring hearing aid, our writer refuses to join the tutters


When friends who aren’t used to live classical music come with me to concerts, they often ask if they need to behave in a particular way. I usually tell them to just turn up and listen – that a concert needs no dress code, no special handshake. But there are unspoken rules. The recurring theme muttered about at this year’s Edinburgh international festival had to do with noise: not that made by performers on stage, which they had paid to hear, but the noise made by audiences. Edinburgh, it turns out, is a pretty loud crowd.

Take the last movement of Mahler’s Ninth Symphony: that tender, faltering statement of resignation and frailty. As conductor Daniele Gatti held the Royal Concertgebouw Orchestra in a breathtaking suspended whisper, the moment should have been utterly transporting – unfortunately, the piercing sound of an unadjusted hearing aid went ringing round the hall like a tiny, whiny theremin. A couple of weeks earlier, Mariss Jansons and the Bavarian Radio Symphony Orchestra had to compete with a cheerful volley of dry coughs ricocheting around the Usher Hall. And there were phones ringing while Nikolai Lugansky played Janáček, not to mention shuffling and chatting as Ensemble musikFabrik played Cage.

It’s not just Edinburgh, of course. In his review of the BBC Symphony Orchestra’s Proms performance of Górecki’s Symphony of Sorrowful Songs, the Guardian’s Martin Kettle picked up on the (invariably Proms-specific) issue of clapping between movements. "Górecki’s solemn spell was only violated by the insistence of part of the Proms audience on applauding at the end of each movement," he wrote. Commenter James Welford replied: "Whilst understanding Mr Kettle’s point about the applause, perhaps some of it was an instinctive reaction to being taken to that plateau of feeling: perhaps a number of those applauding were, like us, there for the first time and could not help themselves." Mr Welford suggests some kind of etiquette primer at the beginning of concerts: "Don’t know why, if it’s considered bad form, a gentle reminder is not made in much the same manner as the no-photography, no-mobile-phones?"

Audience etiquette is a slippery thing, though. The reverence with which we expect to hear Mozart today is worlds away from what Mozart himself would have expected – and, strictly speaking, a proper period performance should also include the food, drink, gossip and hoots of a rowdy 18th-century crowd alongside all those gut strings and natural horns. But the cult of 19th-century genius (Wagner was among the first to decree attentive listening) and the background silence of 20th-century recording studios have shushed our listening habits into pin-drop quiet. All of which makes audience noise seem all the more intrusive nowadays. But how much should we really care about coughs, applause between movements and mobile phones?

The classical music community gives mixed messages. Accessibility is the industry catchword. In some respects, we’ve relaxed into being able to dress how we like and experience concerts as an everybody, everyday event. In others, we’ve come to demand sanctimonious listening environments of silence and absolute stillness. I’d be the last person to advocate stuffiness in the concert hall: there’s nothing more grim than the tut-tuts of an officious crowd. Such a response alienates those not in the know – and if our aim is to welcome new listeners to the fold, we can’t make them feel daft when they get there.

Yet I hate being distracted from great music by careless noise. At worst, it can fundamentally change the fate of a performance, like when Mitsuko Uchida played Beethoven’s Fourth Piano Concerto in Edinburgh last month and was interrupted seconds before the opening chord by a loud clatter. She was visibly startled, had to reposition her hands over the keyboard, and never seemed to fully regain her focus.

Robin Ticciati, principal conductor of the Scottish Chamber Orchestra and future music director of Glyndebourne, takes a pragmatic view. "True silence is something special to be celebrated," he says, "and yes, hearing a mobile phone is irritating. But I can’t let that kind of thing impact my performance. And we shouldn’t be too uptight here – what if that phone belongs to someone who has never been to a concert before and was so excited they forgot to turn it off?" When a phone rang between songs in Veronique Gens’s Edinburgh recital, she just joked: "Ceci n’est pas Duparc."

Marc Minkowski held his left hand out behind him to shush up the loud coughers in Schubert’s Unfinished Symphony with Les Musiciens du Louvre Grenoble at the Usher Hall. It was a clever move, but surely meant that part of his attention was diverted to crowd control rather than to the score.

There’s a hefty list of conundrums when it comes to audience etiquette. Why is it OK to read a programme or a score, when doing so on a smart phone or tablet would be unacceptable? Is head-bopping and air-conducting an honest response to a compelling performance, or an uncouth distraction? Why is it permissible to shout "bravo" after an opera aria but not after a flash concerto cadenza? Perhaps there’s only really one rule: relax, enjoy the concert – but don’t distract those around you.