Media
A prize that celebrates the unsung heroes of the orchestra
January 10th, 2011
Tags: orchestra 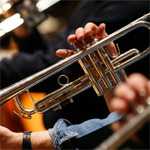 Could be quite a good idea, this: the Salomon prize, a new gong launched by the Royal Philharmonic Society and the Association of British Orchestras, to be awarded for the first time next year. Just another pointless classical music prize that no one will take any notice of?


Here’s hoping not. The annual Salomon prize is for orchestral players – or, rather, for a single orchestral player in a UK-based professional ensemble who in the eyes and ears of their fellow musicians has been “an inspiration to their colleagues and engendered a greater spirit of teamwork within the orchestra”, for which commendation the winner will get a trophy and £1,000. That wording emphasises the collegiate nature of what orchestral musicians do, rather than their soloistic brilliance, which seems a shame: what about the woodwind or brass players, say, who may not necessarily engender teamwork, but are simply some of the best players out there? The essential principle is a good one, however, celebrating the achievements of the thousands of orchestral musicians in this country, those perennially singing but always unsung heroes of our musical lives.

And it’s appropriate that the prize is named after one of the greatest musicians and impresarios ever to live in Britain, Johann Peter Salomon, who led orchestral concerts at the Hanover Square Rooms from 1776 – events that made London the centre of professionalised independent music-making, and for which Haydn wrote his 12 London symphonies. Searching for the next Salomon should be fun. According to the RPS’s website, nominations are only allowed to come from the orchestras themselves, which are allowed to nominate one of their players per year. They are bound to listen to public pressure, too, so lobby the managers of your local orchestra for your favourite player.