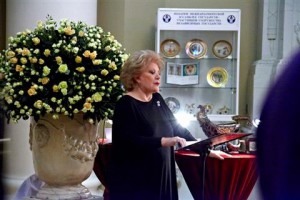 The Cappella will perform the program
at private concerts in 2012.
credit: Alina Usmanova

A team of researchers has gathered once-lost musical compositions written by members of the Romanov family.

The concert held at Tavrichesky Palace on Dec. 10 could probably have claimed a Guinness book entry: It took at least 15 years to put together. The cause was well worth the lengthy preparations. The performance, entitled The Imperial Musical Collection, showcased 20 long-lost musical works composed exclusively by members of the Romanov family, including Tsar Alexander II and Prince Konstantin Romanov.

These works had last been played almost one and a half centuries ago and then were lost in the chaos of the Bolshevik Revolution. Vyacheslav Mozardo, president of the Moscow-based Slava international cultural center, sought to revive Russia’s imperial musical legacy. Along with his team of researchers, Mozardo spent more than a decade going through thousands of files in the Romanov family archives as well as libraries far beyond Russia, from Switzerland to Thailand.

The idea of searching for music written by the Romanovs originally came to producer Bella Abaeva, the driving force behind the project, when she was contemplating her relationship with her own children.

“I was thinking what sort of people I want them to be inspired by,” Abaeva remembers. “It happens all too often that young people today forget that while becoming successful in life it is important to keep your heart and soul alive — and in this respect the Romanovs represent the finest example of members of the elite who were emotionally exuberant and generous.”

Abaeva then joined forces with the Slava Center, and the research began. “Sometimes we would find a fragment of a letter containing a musical score in an archive in one country, and it would take many months to find the rest of the document thousands of miles away in a totally different library,” she said.

Most members of royal families in countries where they have existed or still exist are involved in some sort of artistic activity, from poetry to painting, but hardly ever composition, and in this respect the Romanov family stands out.

“The Romanovs adored composing romances or short classical music opuses as presents for their loved ones,” Abaeva said. “Indeed, we have made it all very private in the sense that while presenting the music, we withhold any personal dedications. We respect the privacy of the authors.”

Importantly, the project gives precious insight into the personalities of the Romanovs, showing them not only as members of the royal family, but as human beings.

The music presented at the concert is terra incognita not only for general classical music audiences, but even for musicologists whose area of expertise is 19th-century Russian music.

“When I played bits and pieces of various works to music reviewers and historians, they would come out with the wildest guesses, from Hector Berlioz to Pyotr Tchaikovsky, but not a single person even suspected that we could be talking about a musical piece written by a Russian aristocrat,” said Mikhail Golikov, the artistic director and principal conductor of the Tavricheskaya Cappella that comprises a youth symphony orchestra, a chamber choir and a horn ensemble. The cappella musicians played the music of the Romanovs to audiences at the concert on Dec. 10.

“As a musician I am absolutely fascinated by these works,” said Golikov. “They would be a blessing to any distinguished orchestra or venue.”

Soprano Natalya German, who sang several romances written by members of the Romanov dynasty at the concert, said she was touched to be part of the project.

“I was amazed by the poetry, as well as by the music: In one romance, a prince dreams of building a beautiful house — made of sapphires and peacock feathers — on an island for his beloved,” German said. “This romance conveys a tenderness that is unthinkable today, but it is what all women want to experience. I envied the woman to whom such romantic verse was dedicated, and I was honored to be able to sing it to Russian listeners, who had never heard it before.”

The Cappella will perform the program in Russian cities and towns including Moscow in 2012 during a series of closed charitable concerts, according to Golikov. In 2013, the program will be played for general audiences. A CD recording of the works will also be made during the course of the next three years.