Media
A Master of the Piano Whose Performances Receive No Applause
February 8th, 2012
Tags: presentations 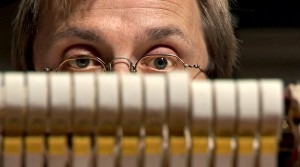 The documentary “Pianomania” follows Stefan Knüpfer as he works on grand pianos.

Pianos don’t cry out in pain, even when their listeners do; they go out of tune, warp and crack. Yet to watch Stefan Knüpfer delicately prod the insides of a Steinway concert grand Model D — a 990-pound, 12,000-part behemoth made of wood, metal and wool — is to witness a procedure akin to laparoscopic surgery, if done with animal glue. Mr. Knüpfer, blond, bespectacled, boyish, is the technician hero of “Pianomania,” a documentary about those who fix, love, play and wildly obsess over these beauties, tweaking and all but disemboweling them in search of the sublime.

Mr. Knüpfer almost sneaks into “Pianomania,” hovering in the background of an early scene in which the famously energetic wunderkind Lang Lang gives a few of the grands at the Vienna Concert House a workout. Mr. Lang apparently needs a sturdier bench for his exertions, which sends Mr. Knüpfer dashing for a new one. Mr. Knüpfer is the chief technician and master tuner in Vienna for Steinway & Sons and spends much of his onscreen time tending the pianos and the virtuosos who pound them into submission, often at the concert house. The movie’s directors, Lilian Franck and Robert Cibis, can be stingy about furnishing background and context, so it’s unclear whether Mr. Knüpfer works only there (he does get out of the concert house) or why or how he got into such a rarefied line of work.

If their parsimonious storytelling doesn’t distract as much as it might it’s because these behind the scenes prove to be a good hook. Primarily using the unobtrusive tag-along strategies of traditional direct cinema, the filmmakers offer privileged access to musicians like Mr. Lang as he prepares for a concert, drawing attention to his cartoonish sneakers and then pulling back for a longer view when, now in fancy dress, he performs with an orchestra, his body wildly, rhythmically bouncing. There’s no narration or offscreen questions (though at times Mr. Knüpfer seems to be answering queries), and a minimum of onscreen text, mostly to identify pieces, people and places. What there is is trial and error, effort and labor, along with a little low-wattage drama, mostly from the pianist Pierre-Laurent Aimard.

At first blush “Pianomania” belongs to that class of documentaries that finds its nonfiction publishing analogue in commodity histories that spin rich narratives out of seemingly niche topics, like cod or the color mauve. But its truer equivalent is the recent documentary “Buck,” about a horse whisperer, which zeroes in on one extraordinarily gifted individual who does something that the rest of us can only dream of or (the filmmakers hope) marvel at, slack-jawed. Although there’s more romance in “Buck,” a classic American survivor story in the triumphant individual vein, in “Pianomania” the very dry, very accomplished Mr. Knüpfer makes engaging company both because he keeps enviable company and because he’s a full-on geek, though one possessed by pianos.

The unassuming Mr. Knüpfer makes a steady, sometimes surprising guide — he can gut and reassemble a piano in seeming minutes — and provides a nice contrast to Mr. Aimard, who with his worried, swooping eyebrows and casually gnomic pronouncements paints a portrait of genius as mystery. Toward the beginning of the movie, Mr. Knüpfer and Mr. Aimard (speaking in German and French) meet to discuss the logistics of a recording that’s a year off. Mr. Aimard gropes toward what he needs for the session, not always transparently. When Mr. Knüpfer asks what kind of tone he’s after, the technician opens his arms wide, as if to suggest a round, sustained, expansive sound, and then closes them in a hug, as if to convey something tighter. “I would like to have both,” Mr. Aimard says simply.

Mr. Knüpfer struggles to please Mr. Aimard, including during the recording, in September 2007, of Bach’s “Art of Fugue,” Mr. Aimard’s first for Deutsche Grammophon. It’s a legendarily complex work that you learn next to nothing about here.

But “Pianomania” isn’t a concert film; it’s a process movie and its emphasis is on how pianos are readied to be played, which ends up being enough. (It would make an obvious double bill with the documentary “Note by Note: The Making of Steinway L1037.”) And so Mr. Aimard’s brows and notes rise and fall, and pianos and people pass by, leaving reverberations, like Aleksey Igudesman and Hyung-ki Joo, who perform as a music-comedy duo. Mr. Knüpfer seems delighted by their antics; they’re tickled by his Steinway stylings. Theirs is a geek trio, in fortissimo.