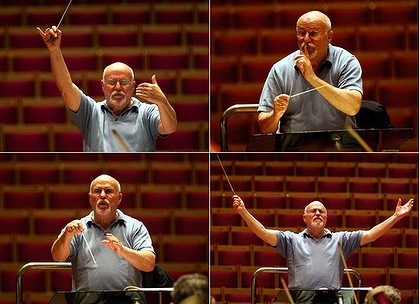 The art of conducting isn’t as mysterious as it might look, David Zinman tells Steve Meacham.

What does a conductor actually do? What do all those baton movements and emotional gestures mean? Haven’t you ever sat in the stalls and wondered?

Classical music critic Justin Davidson decided to investigate recently for New York Magazine. Having studied conducting at university, he wasn’t exactly a novice. But he put himself through a conducting masterclass to explain to the ordinary concertgoer the secrets of the man (or, increasingly, woman) who spends the performance with their back to the audience. It took 4000 words, a batch of diagrams and left some of us none the wiser.

So the Herald decided on a simpler approach. American conductor David Zinman, 75, is in Sydney to conduct the Sydney Symphony in a series of performances (Mozart’s Requiem tonight and tomorrow, reviewed below, and Beethoven’s Piano Concerto No.2 next week).

A concert violinist in his younger days and now conductor and musical director of Zurich’s Tonhalle Orchestra, Zinman is regarded as one of the most approachable maestros in the business. Who better to unveil the mysteries and gestures of this misunderstood profession?
Advertisement

Except that Zinman insists ”there is no mystery”. Nor is there the equivalent of a musical semaphore code which trainee conductors learn precisely. ”It’s all very personal,” he says. ”Each conductor does it differently.”

But surely there must be some kind of international conducting language, otherwise nothing would get played?

”It’s pretty simple. Essentially the musicians have the music in front of them. The conductor has to reinforce the music. Obviously if you put your fingers up to your lip, it means play softer. If you want something played louder, the [baton] gesture becomes stronger, bigger.

”If you are in a car driving down the road and a cop waves his hand, you know he wants you to slow down. Similarly you know what he means when he’s waving you through. It’s the same with conducting. The gestures are pretty primitive, pretty self-evident.”

What is more revealing is the comparisons Zinman makes between conducting and other professions.

The conductor as jockey: ”Asking a conductor how he conducts is a bit like asking jockey how he rides a horse or a racing car driver how he drives. These are all instinctive things. A jockey has to control the horse by [among other things] letting it go or pulling it back. The conductor has to [show the orchestra] the right speed for the sound you want.”

The conductor as psychologist: ”You have to be a psychologist in rehearsals, know how to encourage individual musicians, how to keep them inspired. That’s one of the most important things you learn as a conductor. I was a musician before I became a conductor. I’ve sat in orchestras. I know what it takes. You need to be able to diagnose what is wrong. If something sounds wrong, you have to know what is wrong, what made it wrong and how to correct it.”

The conductor as football coach: ”A conductor is more than a guy who beats time. He has to be a coach. He is responsible for how each musician thinks of himself as a player of music and his place in the team. Of course, you do all the preparing in rehearsal. That’s where you dot the i’s and cross the t’s, make sure people are playing the right notes at the right tempo with the right feeling. But the performance is very different from the rehearsal.”

How much of this is explained in words? Zinman sounds horrified. ”The less a conductor explains in words the better. There’s nothing a musician hates more than a conductor telling him for five minutes what he wants. A horse wants to run. An orchestra wants to play.”

So, when he was an orchestral violinist, did Zinman ever play for a conductor he couldn’t follow? ”Absolutely!”

What does a musician do then? ”You do the best you can. You follow the concert master or the guy sitting next to you. The conductor may get lost, but the orchestra has to keep on playing!”