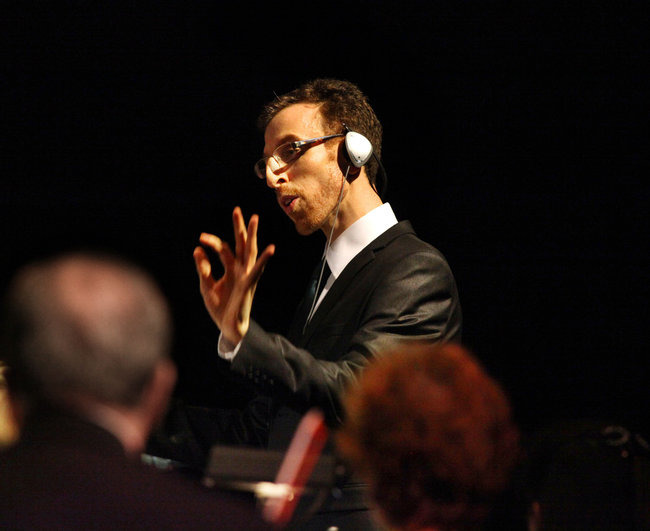 It is a grim vision of the classical music concert: a sea of hollow-eyed faces in the dark, shushing the slightest peep during boring evenings stifled by ritual. The antidote? Audience members should be able to laugh, to clap in midperformance and to whoop with joy, if so moved. That would make classical music less boring and less awful, less a “musical North Korea.”

Such is the vision laid out in a recent article in The Huffington Post, “The Awfulness of Classical Music Explained.” The writer is not an angry young pop star, not a pierced-and-tattooed rebel, not even a frustrated contemporary composer. He is the chief executive and managing director of the 155-year-old Brooklyn Philharmonic.

The executive, Richard Dare, an international investment strategist who took charge of the orchestra a year ago for his first foray into the nonprofit world, sounded his iconoclastic clarion before the orchestra’s concert Saturday evening at Bedford-Stuyvesant Restoration Plaza in Brooklyn.

It was the latest salvo in a longstanding discussion among classical music presenters, performers, composers and audience members about standard concertgoing etiquette — don’t clap between movements; stay quiet; sit still; dress nicely — and whether it turns off potential listeners. The discussion is part of a larger one about the perception that classical music audiences are declining, aging and not being replenished, and whether loosening up the experience would help solve those problems.

Mr. Dare’s article generated a vigorous response, including nearly 400 comments. Responders said they would resent the intrusion of noisy reactions and suggested that if Mr. Dare wanted to act that way, he could do it at home to recordings. Some compared making noise during concerts to splattering paint on a masterpiece canvas. Some denounced him personally. Others praised his tilt at what they called stifling ritualism and alienating elitism in the concert hall.

Mr. Dare said in an interview that many critics had missed his point: a case he made in a follow-up piece in The Huffington Post, dated Thursday.

“I don’t want bedlam to break out,” he said by telephone. “I’m not at all suggesting I want people to yell and scream and clap” while music is played. “I’m keenly interested in not dismantling the experience we have now. I’m interested in making it relevant to more people.”

He said he was trying to put the reader in the mind of an intimidated outsider new to the concert experience and provoke discussion about how to make it more connected.

“I’m a pretty introverted guy,” Mr. Dare said. “I would probably be the last guy to stand up and clap or scream at something.”

Alan Pierson, the Philharmonic’s artistic director and the man who would have to experience audience reaction while standing on the podium, spoke carefully in a telephone interview.

“It very much depends on the context,” he said of the appropriateness of midperformance reaction.

He was mainly interested in “making an experience of orchestral music something that is as deeply and completely engaging as possible,”“If it leads to moments when people respond in performance, that would be great.”

But he added: “It would be very weird if I went up in front of an audience and said I want everybody to express themselves. That feels very forced to me. That’s still against our experience of classical music.”

The Brooklyn Philharmonic, after severe financial troubles, has sought to reinvent itself as a new kind of musical organization, one that takes music to the people. It collaborates with hip-hop artists in Bedford-Stuyvesant, plays old Soviet cartoon music for Russian audiences in Brighton Beach and reinterprets Beethoven’s symphonies. The programs are imaginative and eclectic, and because standard concert halls are too expensive, it finds new and unusual places to play.

Mr. Dare said things were not always so staid, pointing to 19th-century accounts of audience members reacting vociferously during performances.

Mr. Dare’s initial article described his own disappointment at not being able to react spontaneously in a concert hall, to “clap when clapping felt needed, laugh when it was funny, shout when I couldn’t contain the joy building up inside myself.” He called on audiences to “allow ourselves to react to classical music with our hearts just as we do when we meet other forms of art.”

Despite their chief executive’s views, noisy audience reactions do not sit well with some Brooklyn Philharmonic players.

“I think he really missed the mark,” said Gail Kruvand, a double bassist in the orchestra. (She applauded Mr. Dare for taking on leadership of the troubled Philharmonic and for his business success.)

A good concert “takes you to another place,” Ms. Kruvand said, a spiritual realm outside of “mundane life.”

“It’s magical,” she added. “To have people in the audience yelling out, after a solo, it breaks that spell. I don’t think that’s what concert music is about.” Of Mr. Dare, she said, “I wonder how many concerts he’s gone to where he’s experienced that magic, with 2,000 other people spellbound.”

Robert Spano, the music director of the Atlanta Symphony Orchestra who once held that position at the Brooklyn Philharmonic, defends the need for audiences to keep silent and listen attentively in the concert hall.

“Everybody’s experience depends on a willingness to do that,” Mr. Spano said in an interview. “That’s the precious thing about classical music. If we do anything to violate that, we’re not nurturing the art form in the way that we cherish it.

“For people for whom it’s difficult to sit still and be quiet, I don’t think classical music is for them.”