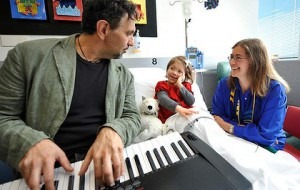 THE mood is tense but the music is upbeat. It sparkles and spins like sun on a raindrop, elusive but somehow reassuringly familiar. It is Mozart as he has never been heard before, jazzed up yet laid back, and it is the last thing that Sasha Longstaff hears before she slips into a state of oblivion induced by two anaesthetists.

While she sleeps, Dr Catherine Crock extracts fluid from her spine and inserts a dose of yellow chemotherapy drugs to fight the leukaemia that Sasha, 12, developed last year (this is her 22nd procedure to date). In the adjoining room, Sasha’s mother, Anna Barvinsky, waits; it is an anxious time. Above the echo of feet and voices, a violin soars, scattering notes caught by a waiting piano. It is a variation of the overture from The Magic Flute, Mozart’s last opera, and the mood is infectious.

”I’ve been in waiting rooms where there’s television but that just increases the anxiety,” says Barvinsky. ”This is much more relaxing.”
Advertisement: Story continues below

The ”Mozart effect” is widely known and hotly debated. The Austrian composer is one of the most studied in history; exposure to his tunes can increase health, well-being and even intelligence, allegedly. Just about everyone is familiar with his work. It is the muzak of call centres, lifts and mobiles. Yet just when you are about to write him off as over-exploited and overexposed, there is the music, utterly elegant and so emotionally tuned to the core of our beings that it goes beyond words.

Mozart is the theme of the Hush Foundation’s latest CD, Luminous, which will be launched tonight at the Melbourne Recital Centre. Set up 18 years ago by Crock, the charity provides music in hospitals to reduce stress and anxiety for children and families all around Australia. On this, the 11th CD, Melbourne composer and pianist Joe Chindamo has reworked some of the greatest known and best loved movements together with a jazz trio and string quartet. The result is all the beauty of classical music without the formality. ”Jazz has proved extremely effective,” says Crock. ”Maybe because it conjures up mental downtime, relaxing on a sofa, or being on holidays.”

Crock, who works at the Royal Children’s Hospital, set up the charity after talking to the families of children who were undergoing procedures. ”They found it so stressful and bewildering and asked if we could provide music. What we have found is that if the families are calm, the children are more likely to be.”

A music lover herself (she plays the oboe and piano, but not very well, she adds hastily) she dug up a few classical CDs but they didn’t quite fit the bill. She started talking to professional musicians and sound recordists about how best to combat the ambient noise created by the hospital machinery, and the project snowballed. Then award-winning jazz pianist Paul Grabowsky offered to compose music specifically for Hush ”and that took us to a different level”.

Says Crock: ”Creative people come into our space and look at it differently and it opens our eyes to what it’s like. Composers come in and see what is happening and tell me it has totally changed their idea of what was going to suit.”

The effects have been far-reaching; hospitals overseas are placing their orders and prison services in New South Wales have shown interest. The CD is now played in 12 hospitals around Australia and to date has raised more than $1 million.

In the recovery room, Sasha is waking up. While she prefers Lady Gaga, The Magic Flute was infinitely better than having to listen to all the other noise. ”It helps distract from the people talking.”