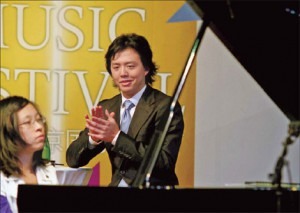 Piano prodigy Li Yundi is the pride of Shenzhen.

Russian pianist Galina Chistiakova says she has never experienced anything like the 16 days she spent in Guangdong province’s Shenzhen city earlier this month.

The 24-year-old says it has been a blur of immersing herself in Chinese culture amid a whirl of piano competitions.

“This is the most difficult competition I have taken (part in),” Chistiakova, who took first prize, says.

“I feel like a sportswoman in the Olympic Games, as I have to play two concertos without a break in the final. But my stay in Shenzhen is a perfect experience. I didn’t have to worry about anything and could concentrate totally on my performance.”

She had never even heard of the metropolis, she says, until she entered the China Shenzhen International Piano Concerto Competition. That’s despite Shenzhen’s domestic identification as the country’s “Piano City”.

The contestants stayed with about 30 host families, most of whom are well-to-do and have children studying piano.

Chistiakova’s hosts provided her with an independent sleeping room and bathroom, three daily meals, a car to drive her to and from the performance venue, and a Boston piano for practicing.

“I have participated in many competitions around the world, but never in my life there was anything like this,” she says.

It was a special experience for her host mother, Deng Lihong, too.

The real estate investor was grateful for the chance to expose her 12-year-old daughter to piano through interactions with Chistiakova. She also met prospective tutors for her daughter through her involvement with the competition.

These are ideal experiences for residents, who embrace Shenzhen as the country’s Piano City.

There were more than 100,000 pianos in the city in 2004, Shenzhen’s Culture, Sports and Tourism Administration says.

The popularization of the piano began its crescendo in 2000, when Shenzhen Art School student Li Yundi claimed the first prize at the Chopin International Piano Competition. A monument in the school now commemorates that historical moment.

Last year, Dan was named by the government of Shenzhen as one of the 30 most important figures of the Shenzhen Special Economic Zone’s three-decade history. He was the only one from the art world.

Dan gave up his teaching post at the Sichuan Conservatory of Music in 1995 and became an instructor at Shenzhen Art School, a secondary school that offers a lower-level diploma than the conservatory.

Dan says income was a major motivator, because Shenzhen offered him a salary that was four times what he was earning at the Sichuan school.

While it’s one of China’s most economically advanced cities, Shenzhen was also known as a “desert of culture” because of its myopic focus on economic development. The piano has proven to be the oasis.

The image of pianist Lang Lang covers advertisements for China Merchants Bank and for the 2011 Universiade at the airport and along the streets.

And while the piano has come to fill the void created by Shenzhen’s relentless pursuit of economic development, it has also boosted that development.

A massive market has sprung up around piano training centers. There are a plethora of schools named after celebrated performers like Kong Xiangdong, Zhou Guangren and Liu Shikun.

The yearly number of people taking graded piano examinations in Shenzhen has increased from a few hundred in the 1990s to more than 10,000.

The piano is a key component of the “culture-based city” development strategy the city government announced in 2003.

The plan calls for the creation of “two cities and one capital” – the “City of Libraries”, the “City of Piano” and the “Capital of Design”.

Shenzhen was designated as a UNESCO City of Design in 2008 and has cultivated one of the country’s best library service systems and dozens of community libraries. But it has yet to be officially recognized as “Piano City”.

While it abounds in first-class concert halls, few pianists reside here. Most performers who have graduated from Shenzhen Art School have moved elsewhere.

It’s unlikely Shenzhen will construct another conservatory, because Guangdong’s nearby provincial capital Guangzhou already hosts the Xinghai Conservatory of Music.

But Dan contends the popularization of piano education is vital and that Shenzhen can do more for it.

Israeli pianist Arie Vardi, a judge of the second Shenzhen International Piano Concerto Competition, believes the economic development of Shenzhen enables its “Piano City” identity to manifest, because it enables more families to afford a piano.

“If every house in Shenzhen has a piano, then more children can play the piano – not to become professionals, but because the piano is the best instrument for general music education,” he says.

Although no Chinese contestant won prizes at this year’s piano concerto competition, Vardi believes the contest increases the instrument’s profile in Shenzhen.

“A competition in a city is an education element not only for the contestants but also for the public, because the public will get involved in the competition,” he says.

“They will talk about it, come to see who is good and compare the outcome. If you ask me how Shenzhen will become a Piano City, it’s because of good schools, teachers and students, many concerts, as well as a successful competition.”