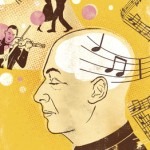 Music Therapy Opens a Path to the Past for Alzheimer’s Patients; Creating a Personal Playlist. One of the raps on iPods is that users tend to close themselves off from other people and retreat into their own private world. But with stroke and dementia patients, iPods and other MP3 players are having just the opposite effect.

Listening to rap and reggae on a borrowed iPod every day has helped Everett Dixon, a 28-year-old stroke victim at Beth Abraham Health Services in Bronx, N.Y., learn to walk and use his hands again.

Trevor Gibbons, 52, who fell out of a fourth-floor construction site and suffered a crushed larynx, has become so entranced with music that he’s written 400 songs and cut four CDs.

Ann Povodator, an 85-year-old Alzheimer’s patient in Boynton Beach, Fla., listens to her beloved opera and Yiddish songs every day on an iPod with her home health aide or her daughter when she comes to visit. “We listen for at least a half-hour, and we talk afterwards,” says her daughter, Marilyn Povodator. “It seems to touch something deep within her.”

Caregivers have observed for decades that Alzheimer’s patients can still remember and sing songs long after they’ve stopped recognizing names and faces. Many hospitals and nursing homes use music as recreation, since it brings patients pleasure. But beyond the entertainment value, there’s growing evidence that listening to music can also help stimulate seemingly lost memories and even help restore some cognitive function.

“What I believe is happening is that by engaging very basic mechanisms of emotions and listening, music is stimulating dormant areas of the brain that haven’t been accessible due to degenerative disease,” says Concetta Tomaino, executive director of the Institute for Music and Neurologic Function, a nonprofit organization founded at Beth Abraham in 1995.

Dr. Tomaino, who has studied the therapeutic effects of music for more than 30 years, is spearheading a new program to provide iPods loaded with customized playlists to help spread the benefits of music therapy to Alzheimer’s patients even at home. “If someone loved opera or classical or jazz or religious music, or if they sang and danced when the family got together, we can recreate that music and help them relive those experiences,” she says.

Dr. Tomaino says she frequently sees dementia patients make gains in cognitive function after music therapy. In one unpublished study she led a few years ago, with funding from the New York State Department of Health, 45 patients with mid- to late-stage dementia had one hour of personalized music therapy, three times a week, for 10 months, and improved their scores on a cognitive-function test by 50% on average. One patient in the study recognized his wife for the first time in months.

David Ramsey, a music therapist and psychologist, holds twice weekly sessions at Beth Abraham, where small groups of patients can sing and dance to familiar songs like “Under the Boardwalk” and “Swing Low, Sweet Chariot.” Mr. Ramsey will sometimes stop singing and let residents fill in the blanks on their own. When they do that, he says, “they are exercising their cognitive function—just like they are exercising in physical therapy.” And unfamiliar songs quickly become familiar, another sign that even advanced Alzheimer’s patients are forming new memories. “One of our therapists played, ‘Who Let the Dogs Out?’ I know they had never heard that one, but it became an anthem,” he says. 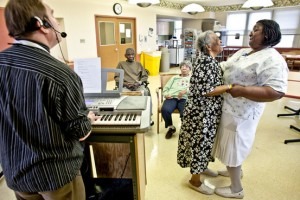 In addition to benefiting Alzheimer’s patients, decades of studies have demonstrated that music can help premature infants gain weight, autistic children communicate, stroke patients regain speech and mobility, dental, surgical and orthopedic patients control chronic pain and psychiatric patients manage anxiety and depression. Now, neuroscientists are starting to identify the underlying brain mechanisms that explain how music connects with the mind and body, and they are starting to work hand in hand with music therapists to develop new therapeutic programs.

There’s no single center for music in the mind—the brain appears to be wired throughout for music, since it engages a wide variety of functions, including listening, language and movement. But Petr Janata, a cognitive neuroscientist at the University of California, Davis’s Center for Mind and Brain, recently located an area of the brain—the medial prefrontal cortex, just behind the forehead—that seems to serve as a hub for music, memory and emotions.

In a study published online in the journal Cerebral Cortex in February, Dr. Janata had 13 UC Davis students listen to excerpts of 30 songs chosen randomly from “top 100” charts from years when they were 8 to 18 years old, while he recorded their brain activity using functional magnetic resonance imaging, or fMRI. Songs that were unfamiliar evoked reactions in the auditory processing parts of the students’ brains; those that elicited emotional reactions stimulated other brain areas. When songs conjured up a specific personal memory, there was particularly strong activity in the medial prefrontal cortex. That’s where what Dr. Janata calls “a mental movie” seems to play in the mind’s eye, with music serving as its soundtrack.

And, it turns out, this same medial prefrontal cortex had been identified in earlier research as one of the last parts of the brain to atrophy as Alzheimer’s disease progresses.

Dr. Janata hopes to study whether the same phenomenon occurs, in the same part of the brain, with older test subjects and eventually with Alzheimer’s patients. He says that activating memories with music cannot reverse or cure neurological diseases like dementia. But playing familiar music frequently can significantly improve a patient’s mood, alertness and quality of life.

Music therapy isn’t used more widely with Alzheimer’s and dementia patients largely because of a lack of manpower and money, experts say. There are only about 5,000 certified music therapists in the U.S., and fewer than 20% work with geriatric patients. That’s why the Institute for Music and Neurologic Function is trying to bring music therapy into patients’ homes.

Caregivers or family members can use records or tapes at home, or program their own iPods. The institute provides suggested songs by era and genre on its Web site, www.imnf.org. But those who don’t have the time or technical skills can send an iPod to the institute after filling out a questionnaire about the patient’s musical tastes, and the institute will program a customized iPod for them. (See the Web site for prices and package information.) The institute is also seeking donations of iPods that are no longer in use to load with music and send to Alzheimer’s patients who can’t afford their own.

Dr. Tomaino advises caregivers to listen as long as the patient seems interested. A patient may want to listen alone through headphones or through speakers so that a friend or family member can listen along. “Then they can reminisce together about what the music reminds them of or just hold hands to be more connected,” she says. She also suggests involving the whole family in interacting with the music. “The kids can drum along while Grandpa listens to Big Band sounds,” she says.

One possible downside: Dr. Tomaino says sometimes a song can evoke unhappy memories, such as the death of a loved one or a relationship gone bad. She recalls a Holocaust survivor at Beth Abraham who became very upset upon hearing a Wagner opera.

“If family members don’t know what music would be appropriate, think in generalizations,” she says. “If a parent loved to go dancing in their teens, picking the most popular songs from that era tends to be pretty safe.” Music from a person’s teenage years seems to be especially evocative of memories, for reasons not well understood.