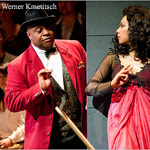 GEORGE GERSHWIN called “Porgy and Bess” a “folk opera,” emphasis on opera, and lived to see the premiere, on Broadway, in truncated but substantially operatic form.


At that time the piece was sung virtually all the way through, but the version that traveled the world after Gershwin’s death, in 1937, was effectively a musical comedy, with spoken scenes framing musical numbers that — apart from “Summertime” — were invariably performed much too fast.

Nikolaus Harnoncourt, the Austrian cellist who went on to become a conductor and a founding father of the modern early-music movement, heard it done that way by a company touring Europe in the 1970s. “I was moved but horrified,” he said a few months ago in Vienna. He longed to hear a “Porgy and Bess” true to Gershwin’s intentions, to the extent that it is possible to reconstruct them.

“I decided right then to put it on myself,” he said. “Lots of musicians said: ‘Don’t. You don’t have the right blood.’ But Gershwin was Russian. Why should I understand his music any less than Dvorak?”

Though other conductors — John DeMain, Lorin Maazel, Simon Rattle and John Mauceri, to name a few — got there first, Mr. Harnoncourt finally carried out his plan last summer at the Styriarte Festival in Graz, his hometown. (This year the festival, opening on June 25, explores evolving ideas of Austrian identity as reflected in music from the Middle Ages to the Hapsburg Empire and beyond, with Mr. Harnoncourt scheduled to conduct Smetana’s “Ma Vlast” and Haydn’s “Creation.”)

In preparing “Porgy and Bess,” Mr. Harnoncourt dug deep into long-neglected sources, taking nothing for granted. Gershwin has been a passion of his since childhood.

“My father’s brother, René d’Harnoncourt, who later became the director of the Museum of Modern Art, emigrated to Mexico in 1926 and in 1933 moved to the United States,” Mr. Harnoncourt said. “He was friends with the Gershwins, Picasso, Frank Lloyd Wright. And whenever a new musical came out, he would send us the sheet music.

“Wake me up in the middle of the night, and I can still sing you the songs. ‘She’s the illegitimate daughter of an illegitimate son’ — that’s from ‘Of Thee I Sing.’ I wasn’t quite 6 years old when I heard ‘I Got Plenty o’ Nuttin,’ and I thought it was just wonderful.”

Now available in a live recording from RCA Red Seal, Mr. Harnoncourt’s “Porgy and Bess” was to have been the central panel of a 20th-century operatic triptych. The project began in 2008 at the Theater an der Wien, in Vienna, with Stravinsky’s “Rake’s Progress,” the first 20th-century opera in Mr. Harnoncourt’s career. The final piece was to have been Berg’s “Lulu” at the Salzburg Festival this summer, but surgery last fall left Mr. Harnoncourt insufficient time to prepare. (His junior colleague Marc Albrecht has taken over.)

Ever restless, Mr. Harnoncourt, 80, has been pursuing other new horizons as well. In July 2008 he collaborated with his son Philipp Harnoncourt in staging Mozart’s “Idomeneo” at the Styriarte Festival, promising that the directing experiment would be a one-time thing. (A DVD is available through styriarte.com.)

The elder Mr. Harnoncourt delved into 20th-century opera with the same microscopic powers of observation, bold imagination and grasp of broad contexts that he brought first to Monteverdi and Bach, then to symphonic and operatic works of the Classical and Romantic masters.

On the face of it “The Rake’s Progress” — often regarded as a backward-looking Mozartean pastiche — seems easiest to reconcile with Mr. Harnoncourt’s prior interests. But that would be to forget his allegiance to the revolutionary in Mozart rather than to the Meissen figurine. (In the booklet for “Porgy and Bess,” he remarks in passing that Sarastro, the sonorous mouthpiece of humanitarian wisdom in “The Magic Flute,” is in truth a liar and scoundrel. His argument rests not on literary evidence but on fine musical points.)

To the tenor Toby Spence, who has sung the antihero Tom Rakewell also under the antiquarian Christopher Hogwood and the new-music champion Ingo Metzmacher, Mr. Harnoncourt’s approach was like no one else’s.

“He interpreted almost the whole score in terms of minuets, waltzes and polkas,” Mr. Spence said recently from London. (Nobody quarrels with Mr. Harnoncourt as an interpreter of Viennese waltzes.) “He’s such an engaging man that people are more than happy to do what he asks, even if it’s contrary to their instincts. He has Atlas-like shoulders and has the strength of character to carry the weight of the decisions he makes.”

Few, it seems safe to say, have ever made the vocal lines of “The Rake’s Progress” sound so infectiously melodic, like show tunes. The instrumental textures were also remarkable. The morbid graveyard scene startled the ear with a richly twanging harpsichord that seemed to be grinding out delirious, slow-moving fantasias in the style of a latter-day Bach.

“You were hearing a steel-framed Austrian harpsichord like those produced by Pleyel that were the standard in Baroque music around 1950, when Stravinsky wrote ‘The Rake’s Progress,’ ” Mr. Spence said. “Harnoncourt had it rebuilt from scratch, at not inconsiderable expense, to get that haunting larger-than-life ‘Addams Family’ sound.”

But then, Mr. Harnoncourt has always had an exacting ear for timbre. For “Porgy and Bess” he took Gershwin at his word, bringing in genuine African drums (the djembe and dumdum) rather than make do with garden-variety bongos.

True to form, Mr. Harnoncourt studied not only the paper trail but also the big biographical and cultural picture. He knew that as Gershwin was gearing up for the magnum opus, he followed the herd to Paris to sit at the feet of the guru Nadia Boulanger. “Everyone who was serious went to Boulanger,” Mr. Harnoncourt said. “Quincy Jones went to her too. But I hear nothing of Boulanger in ‘Porgy and Bess.’ ”

Of crucial importance, however, was Gershwin’s friendship with Alban Berg, whom he met in Vienna in 1928. Berg’s bleak soldier’s tale “Wozzeck” is ranked today at or near the top of anyone’s list of 20th-century masterpieces, and “Porgy and Bess,” Mr. Harnoncourt said, “was supposed to be an American ‘Wozzeck.’ ”

In 2007 the musicologist Christopher Reynolds made this case in The Journal of the Society for American Music, writing that “Gershwin had nothing to learn from Berg about melody and text setting.” Mr. Reynolds focused less on small-scale technicalities than on the dramatic deployment of large-scale musical forms. In this respect Berg had much to teach Gershwin, and Gershwin was an eager student.

As Porgy, Mr. Harnoncourt chose the New Zealand-born Samoan bass-baritone Jonathan Lemalu, who was new to the opera, though many others in the cast were old hands. “After all the research Harnoncourt had done,” Mr. Lemalu said recently from London, “he still wanted to hear our opinions. At first people would answer, ‘Whatever you want, Maestro.’ And he said: ‘Look, we don’t have time to be walking on eggshells. If you feel I’m doing something wrong, you need to tell me.’ He made us all feel the project was a collaboration, not his iron rule of law. But always he would refer back to Gershwin’s markings. I don’t even know where he got the materials. He knew things that aren’t in the printed score.”

Rather than simply perform the “authentic,” uncut score as Gershwin first wrote it, Mr. Harnoncourt sought to create an ideal “Porgy and Bess,” reflecting revisions made during preparations for the original production. Some cuts were made to tighten the drama, and those he kept. But he disregarded others that has been made just to save time, to allow audiences to catch their last trains, or to spare Porgy’s voice, since no one could get through the “Buzzard Song” eight times a week.

There was also the matter of recreating the eerie “Symphony of Noise,” a long-lost sound collage heard during a pregnant lull in the third act. Perhaps the sheer power of suggestion is at work here, but Mr. Harnoncourt’s performance achieves a tragic sweep, depth and universality that really do justify comparison with “Wozzeck.”

“Yes,” Mr. Harnoncourt said, “Gershwin and Berg have a lot to do with each other.” And the traffic was not all one way.

“There’s a lot of jazzy stuff in ‘Lulu,’ ” he added. “I’m sure that Gershwin was Berg’s inspiration for that.”