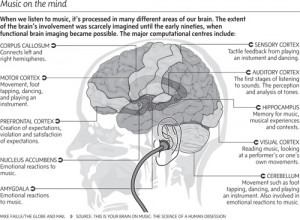 I’m a big fan of music, and use it a lot when working, but I had no idea about how it really affects our brains and bodies. Since music is such a big part of our lives, I thought it would be interesting and useful to have a look at some of the ways we react to it without even realizing.

“Without music, life would be a mistake” – Friedrich Nietzsche

Of course, music affects many different areas of the brain, as you can see in the image below, so we’re only scratching the surface with this post, but let’s jump in.

We can usually pick if a piece of music is particularly happy or sad, but this isn’t just a subjective idea that comes from how it makes us feel. In fact, our brains actually respond differently to happy and sad music.

Even short pieces of happy or sad music can affect us. One study showed that after hearing a short piece of music, participants were more likely to interpret a neutral expression as happy or sad, to match the tone of the music they heard. This also happened with other facial expressions, but was most notable for those that were close to neutral.

Something else that’s really interesting about how our emotions are affected by music is that there are two kind of emotions related to music: perceived emotions and felt emotions.

This means that sometimes we can understand the emotions of a piece of music without actually feeling them, which explains why some of us find listening to sad music enjoyable, rather than depressing.

Unlike in real life situations, we don’t feel any real threat or danger when listening to music, so we can perceive the related emotions without truly feeling them—almost like vicarious emotions.

We all like to pump up the tunes when we’re powering through our to-do lists, right? But when it comes to creative work, loud music may not be the best option.

It turns out that a moderate noise level is the sweet spot for creativity. Even more than low noise levels, ambient noise apparently gets our creative juices flowing, and doesn’t put us off the way high levels of noise do.

The way this works is that moderate noise levels increase processing difficulty which promotes abstract processing, leading to higher creativity. In other words, when we struggle (just enough) to process things as we normally would, we resort to more creative approaches.

In high noise levels, however, our creative thinking is impaired because we’re overwhelmed and struggle to process information efficiently.

This is very similar to how temperature and lighting can affect our productivity, where paradoxically a slightly more crowded place can be beneficial.

3. Our music choices can predict our personality

Take this one with a grain of salt, because it’s only been tested on young adults (that I know of), but it’s still really interesting.

In a study of couples who spent time getting to know each other, looking at each other’s top ten favorite songs actually provided fairly reliable predictions as to the listener’s personality traits.

Interestingly, some traits were more accurately predicted based on the person’s listening habits than others. For instance, openness to experience, extraversion and emotional stability were the easiest to guess correctly. Conscientiousness, on the other hand, wasn’t obvious based on musical taste.

Here is also a break-down of how the different genres correspond to our personality, according to a study conducted at Heriot-Watt University: 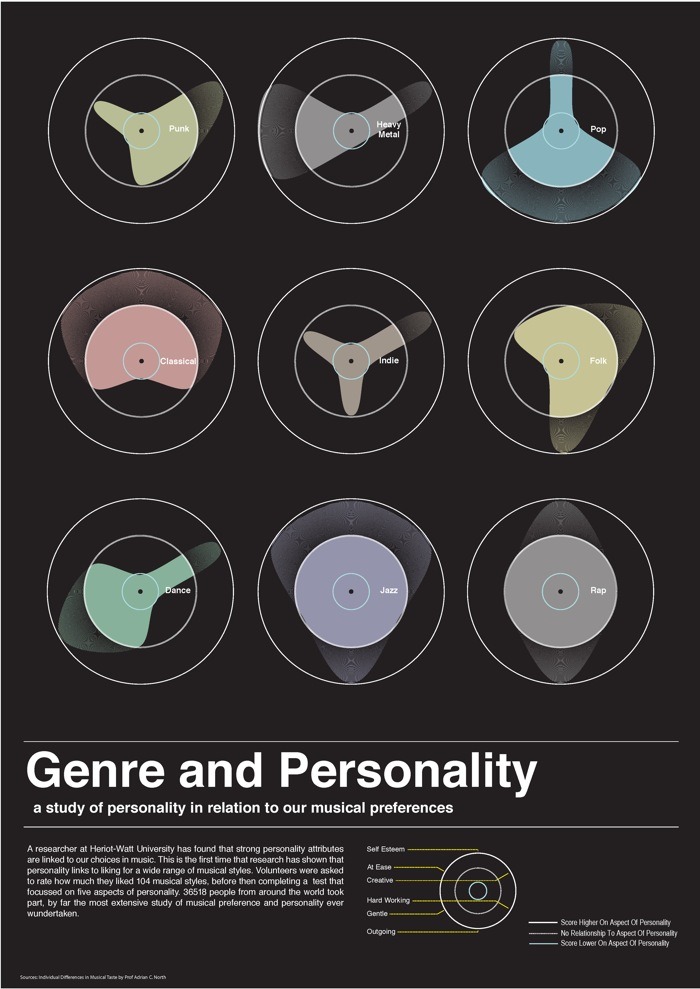 To break it down, here is the connection they have found:

Blues fans have high self-esteem, are creative, outgoing, gentle and at ease

Jazz fans have high self-esteem, are creative, outgoing and at ease

Classical music fans have high self-esteem, are creative, introvert and at ease

Rap fans have high self-esteem and are outgoing

Opera fans have high self-esteem, are creative and gentle

Country and western fans are hardworking and outgoing

Reggae fans have high self-esteem, are creative, not hardworking, outgoing, gentle and at ease

Dance fans are creative and outgoing but not gentle

Indie fans have low self-esteem, are creative, not hard working, and not gentle

Bollywood fans are creative and outgoing

Rock/heavy metal fans have low self-esteem, are creative, not hard-working, not outgoing, gentle, and at ease

Chart pop fans have high self-esteem, are hardworking, outgoing and gentle, but are not creative and not at ease

Soul fans have high self-esteem, are creative, outgoing, gentle, and at ease

Of course, generalizing based on this study is very hard. However looking at the science of introverts and extroverts, there is some clear overlap.

4. Music can significantly distract us while driving (contrary to common belief)

Another study done on teenagers and young adults focused on how their driving is affected by music.

Even more surprising: music provided by the researchers proved to be more beneficial than no music at all. It seems that unfamiliar, or uninteresting, music is best for safe driving.

5. Music training can significantly improve our motor and reasoning skills

We generally assume that learning a musical instrument can be beneficial for kids, but it’s actually useful in more ways than we might expect. One study showed that children who had three years or more musical instrument training performed better than those who didn’t learn an instrument in auditory discrimination abilities and fine motor skills.

They also tested better on vocabulary and nonverbal reasoning skills, which involve understanding and analyzing visual information, such as identifying relationships, similarities and differences between shapes and patterns.

These two areas in particular are quite removed from musical training as we imagine it, so it’s fascinating to see how learning to play an instrument can help kids develop such a wide variety of important skills.

Similar research shows this correlation for exercise and motor skills in the same way, which is also fascinating.

It’s not just kids that can benefit from musical training or exposure. Stroke patients in one small study showed improved visual attention while listening to classical music.

The study also tried white noise and silence to compare the results, and found that, like the driving study mentioned earlier, silence resulted in the worst scores.

Because this study was so small, the conclusions need to be explored further for validation, but I find it really interesting how music and noise can affect our other senses and abilities—in this case, vision.

Another study focused on noise, rather than music, showed that when it comes to being distracted by the conversations of others, phone calls where we can only hear one side of the conversation are the worst offenders.

After a survey showed that up to 82% of people find overhearing cellphone conversations annoying, Veronica Galván, a cognitive psychologist at the University of San Diego, decided to study why these are such a pain.

In the study, participants completed word puzzles while one half of them overheard one side of a mundane phone conversation in the background. The other half of the volunteers heard the entire conversation as it took place between two people in the room.

The unpredictability of a one-sided conversation seems to be the cause of it grabbing our attention more. Hearing both sides of a conversation, on the other hand, gives us more context which makes it easier to tune out the distraction.

Then again, as we’ve explored before, getting distracted is often not such a bad things for various reasons.

Back to music again, and we can see that just like silence doesn’t help us to be more creative or better drivers, it’s not much use when we’re exercising, either.

Research on the effects of music during exercise has been done for years. In 1911, an American researcher, Leonard Ayres, found that cyclists pedaled faster while listening to music than they did in silence.

This happens because listening to music can drown out our brain’s cries of fatigue. As our body realizes we’re tired and wants to stop exercising, it sends signals to the brain to stop for a break. Listening to music competes for our brain’s attention, and can help us to override those signals of fatigue, though this is mostly beneficial for low- and moderate-intensity exercise. During high-intensity exercise, music isn’t as powerful at pulling our brain’s attention away from the pain of the workout.

Not only can we push through the pain to exercise longer and harder when we listen to music, but it can actually help us to use our energy more efficiently. A 2012 study showed that cyclists who listened to music required 7% less oxygen to do the same work as those who cycled in silence.

Some recent research has shown that there’s a ceiling effect on music at around 145 bpm, where anything higher doesn’t seem to add much motivation, so keep that in mind when choosing your workout playlist. Here is how this breaks down for different genres:

Now if we team up these different “tempos” with the actual work-out we’re doing, we can be in much better sync and find the right beat for our exercise. If you match up the above with the graphic below it should be super easy to get into a good groove: 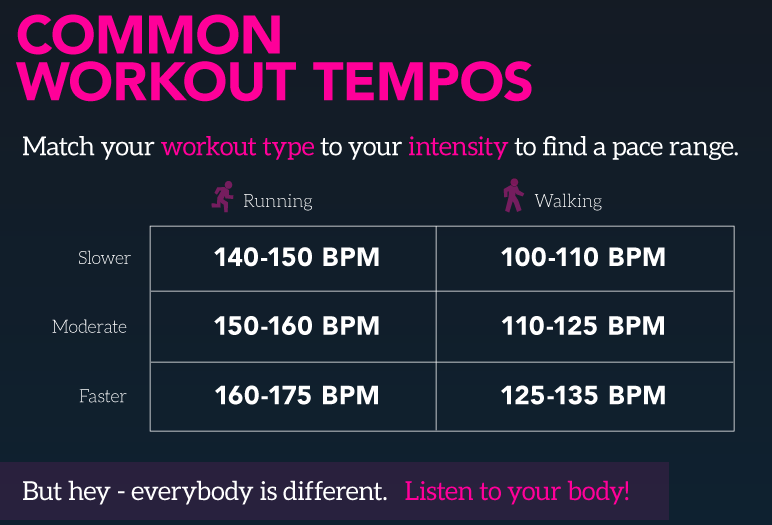 So in the same way that exercising makes us happier, it’s not surprising that music adds significantly to our work-out success.

What have you noticed about how music affects you? Let us know in the comments.