Media
5 reasons to get that kid some music lessons
November 28th, 2014
Tags: education 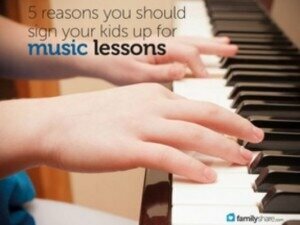 There are thousands of clubs, sports teams, schools and other extracurricular groups that are clamoring for your child’s undiscovered skills. Should you sign him up for soccer or piano lessons? Take him hunting or to the movies? How many activities can he participate in before he burns out?

It’s not an easy decision to make. Each activity has the potential to teach your child valuable skills, and may even turn into a career or hobby later in life.

In my family, we divided our attention between sports and music. I enjoyed both immensely and still play the piano and co-ed softball when I get the chance. It was the music lessons, though, that contributed to who I am the most. If you’re debating whether music lessons are worth your child’s time and your money, here are five reasons that may help you make your decision.

Music educates the whole child
From day one, children learn notes, rhythms, melodies and scales. But, they’re actually learning much more than that. They are learning to interact with other people and becoming better acquainted with themselves as well. Music stimulates the vestibular system, which helps all the senses coordinate with one another. According to Howard Gardner, who wrote Frames of the Mind: The Theory of Multiple Intelligences, musicmay also be “a privileged organizer of cognitive processes in any subject, especially among young people.”

Music helps children understand culture
According to Kimberly Balls, a junior studying music education at Brigham Young University, “Many of the songs that have stood the test of time are folk songs. They maintain the speech patterns, traditions and more of any given culture. The folk songs of different countries are as different as the countries themselves.” Music from countries all over the world can be incorporated into your music education many ways whether you’re a singer, dancer or tuba player.

Music helps establish group identity
Anyone who has watched a battle scene or sports movie knows this. It’s the music that makes the scene. It brings everyone together and makes that stirring speech all the more inspiring. Participating in a choir, band, or piano duet can be a really special experience as well. Working with someone else to create music binds you together in a way that can’t really be explained.

Music helps you express your feelings
One reason music is so powerful is that it has the ability to say things that you can’t say in words. Some people have a difficult time expressing feelings and rely on music to help them sort through their emotions. I do this all the time. Whenever I’m stressed out, angry, sad or trying to make a difficult decision, I sit at my piano and pound on the keys for an hour or so. When I’m finished, I feel much more calm and able to tackle life’s problems again.

Music is physical
It’s not as physical as soccer, true, but it does require you to move around. Children need all the physical stimulation they can get, which is easily accomplished with singing games and practice sessions.

Years ago, before my parents married, my dad told my mom that one of the reasons he wanted to marry her was because she was a musician and he wanted music to be a part of his future home. And, it was. Music blessed our lives when we were a young family and continues to bring us together today.