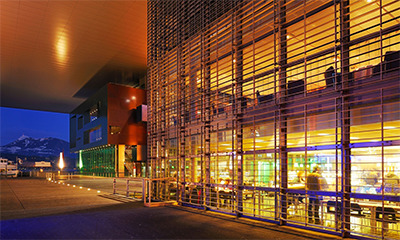 A world-class classical music venue in London may be years away so where can music lovers find truly outstanding acoustics? Trevor Cox picks 10 landmark concert halls around the world where brilliant design means beautiful sound

This is a modern auditorium – opened in 1998 and right next to Lucerne’s railway station – to rival the best classical halls. While venues might be designed for a resident orchestra, without pop concerts and comedy shows many would struggle to balance the books. The long reverberance that enhances the orchestral sound can turn pop music and speech into a muddy cacophony. Most halls therefore have some way of changing the acoustics. In Lucerne, this is done via a giant reverberation chamber that wraps around the outside of the hall. For organ and choral music, the access doors are opened to mimic the acoustic characteristics of a cathedral. 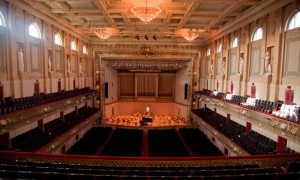 Symphony Hall in Boston was where science became an essential part of concert hall design. The shoebox shape was inspired by the old Gewandhaus in Leipzig. But copying features of an old hall does not ensure a great venue. The sublime acoustics of Symphony Hall – in the heart of the city and on one of its main thoroughfares, Massachusetts Avenue – is down to Wallace Clement Sabine, a physics professor from Harvard University. In the late 19th century, Sabine was the first person to carry out scientific measurements to understand how sound behaves in rooms. Completed in 1900, the auditorium is still considered to be one of the top venues for classical music in the world. 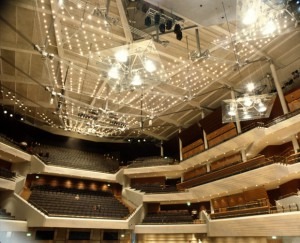 New concert halls are almost silent, allowing musicians to draw listeners in with incredibly quiet playing. The breathing and fidgeting of the audience actually creates more sound than other background noises. Only in intense moments where the audience collectively hold its breath, can this deep silence be heard. Take a backstage tour of the Bridgewater Hall, and you will be told the story of the IRA bomb that on 15 June 1996 broke virtually every window in the city centre. The hall is so well isolated that construction workers inside the auditorium did not hear the explosion. The venue held its first performance in September 1996 and now has three resident orchestras: the Hallé, the BBC Philharmonic and Manchester Camerata. 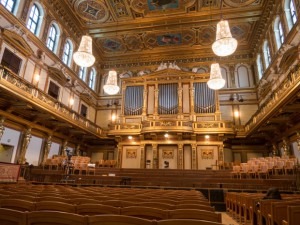 The Musikverein, on Vienna’s Ringstrasse, is often referred to as the best concert hall in the world. The auditorium is home to the Vienna Philharmonic Orchestra, with past famous conductors including Brahms, Bruckner and Mahler. When the Philharmonic plays a sweeping crescendo, it is as though the hall springs into life. At its quietest the music seems to be coming from the stage, but as notes get louder the whole orchestra appears to physically broaden, and you perceive a tsunami of sound that washes over you from all directions. 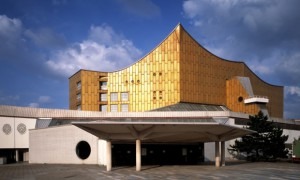 The Philharmonie, which opened in 1963 and is noted for its distinctive tent-like exterior, was developed in line with architect Hans Scharoun’s socialist views and, by a combination of skill and accident, revealed a new way forward for architectural acoustics: vineyard terracing. By breaking the audience into blocks, the intervening walls can be used to reflect more sound to the audience from the sides. Scharoun noted that “people always gather in circles when listening to music informally”, and this inspired the radical concept of music in the round. About a third of the audience is behind the orchestra. The rear seats have great views, but some find the orchestral balance odd. 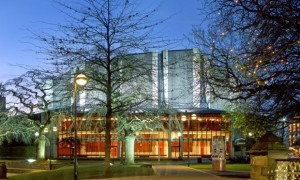 Not long before designing the acoustics of this hall, Harold Marshall developed a theory that good auditoria need sound to be reflected from the walls and to reach the listener’s head from the side. The music in the two ears is then subtly different, as it takes longer for the sound to reach the ear furthest away.

His theory resulted in this revolutionary design, where vast, wooden panels form a giant tepee above the audience. The Town Hall is being repaired, following the 2011 Christchurch earthquake, which caused widespread destruction in the city, and is then expected to form part of a new performing arts precinct that authorities are hoping to open in 2018. To see a similar design, visit the 2,000-plus capacity Michael Fowler Centre Auditorium in Wellington. 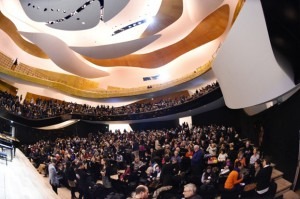 Within the new Philharmonie there is barely a straight line to be seen. The walls and balconies form sweeping curves, and from the ceiling hang clouds of panels looking like they have been cut out from giant planks of wood. But these curves are not just strokes of the architect’s pen to create visual beauty, every surface is carefully shaped to provide enhancing sound reflections into the audience. The Philharmonie is not a facsimile of an old venerated hall, but an auditorium of its time, one that could only be built now by exploiting modern acoustic engineering. As well as enjoying concerts, visitors can also explore musical heritage, as the venue features a museum that retraces the history of music from the 17th century to today through the popular instruments used to create it. 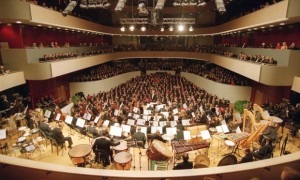 Another entrant in the modern category of concert halls, the Sibelius Hall was only completed in 2000 but its design and acoustic ethos have earned it many plaudits. On the harbour in Lahti, the former industrial heartland of the city, the hall is less than an hour’s train ride from Helsinki – and the journey is well worth it. Many auditoria have wooden walls around the stage, but the Sibelius Hall goes one step further by using timber throughout the construction. There is a common misconception that the wooden walls of auditoria vibrate like the body of a violin to create a beautiful sound: in reality, every note the orchestra makes needs nurturing so it can reverberate around the hall. Vibrating walls would just take sound away. The wood in a grand auditorium is either very thick or is just a thin veneer glued solidly onto concrete so the sounds reflect efficiently. 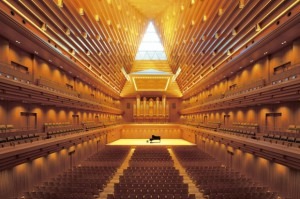 Looking down from a balcony, the Tokyo Opera City Concert Hall appears to be a conventional, rectangular hall. Look up, however, and the ceiling forms a giant distorted pyramid covered in complex wooden grooves. The hall shape recalls the well-regarded Maltings Concert Hall in Snape, England. Auditoria of this shape are actually quite rare, but can have excellent acoustics. At the opening night in Tokyo, celebrated cellist Yo-Yo Ma commented: “This hall simply has some of the best acoustics in which I have ever had the privilege to play.” 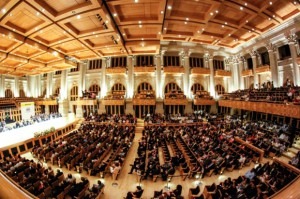 When a new venue for the São Paolo Symphony Orchestra was needed in the 1990s what might, at first, seem a rather unlikely space was chosen: an open-air waiting area by a railway station. The piazza had just the right proportions, the width was the same as Boston Symphony Hall and the length and height matched the Grosser Musikvereinssaal in Vienna. Concertgoers can still admire the giant columns from the original plaza, as well as the giant moveable ceiling that helps change the acoustics depending on whether the orchestra is performing baroque or romantic music.