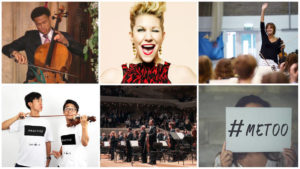 In a decade of change in music, we’ve selected 10 moments that reflect the altering course of classical music history.

The early 2010s were very much about virtual everything, as the arts world started to discover a whole host of new connections and collaborations that could take place online.

The decade began with a project from composer and conductor Eric Whitacre who created a user-generated choir, taking video recordings from webcams around the world. His Virtual Choir made its debut in 21 March 2010. Eric has gone on to head up four other projects, with thousands of choral participants and millions of views. Full story.